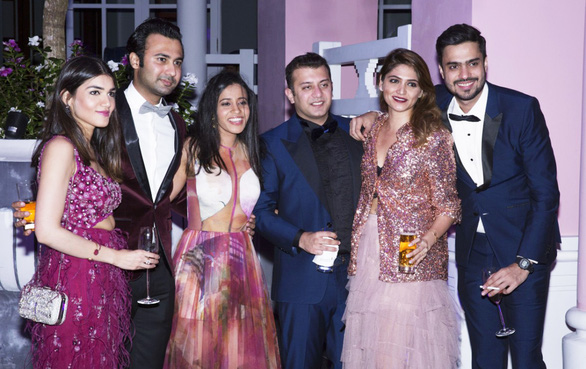 More Indian billionaires are coming to Phu Quoc, an island off the southern Vietnamese province of Kien Giang that boasts one of the world’s most idyllic beaches and romantic sunsets, to hold extravagant wedding ceremonies that can last days on end.

The first wedding of a billionaire Indian couple to be held on Phu Quoc Island kicked off on March 3 and is poised to last for a full week until March 10, said a representative from Horizon, the India-based wedding planner behind the event.

The bride, Kaabia Grewal, and the groom, Rushang Shah, chose Phu Quoc as the venue to tie the knot after learning of the island’s beauty during an India visit by leaders of Kien Giang Province in late 2018 to promote tourism to the island, a communications official said at a press conference on Friday.

Eleven main events are held during the week-long ceremony, with the most important rituals taking placing at the JW Marriott hotel on Phu Quoc from March 7-10.

A theme is chosen for each day with specific dress codes for guests to follow, while a range of activities such as running competitions, lantern making, and marine life viewing are also available to entertain guests.

Around 225 people had flown in to Phu Quoc from nearly ten different countries before the wedding to prepare for the extravagant event, including 30 people in charge of fashion, makeup, hairstyling and venue decorations.

Nguyen Viet Thong, director of Kien Giang’s Department of External Affairs, said provincial authorities had made all efforts to facilitate the wedding ceremony – the first of its kind ever held on Phu Quoc Island.

The couple’s 700 wedding guests as well as metric tons of goods, clothes and equipment were cleared for entrance into Phu Quoc with ease thanks to good coordination from different government bodies, Thong said.

A representative from Sun Group, developer of the JW Marriott hotel where the wedding is held, said it had successfully organized wedding for high-profile couples in the past, but a week-long Indian wedding is unprecedented.

At least six other billionaire Indian couples have booked Phu Quoc to be the venue for their wedding ceremonies following the success of the first one, a Horizon representative said at Friday’s press conference.

Located in the Gulf of Thailand and a two-hour boat ride from Kien Giang Province, Phu Quoc is the largest island in Vietnam with a total area of 574 square kilometers and a permanent population of more than 100,000.

Visitors can also arrive on the island by air, with the Phu Quoc International Airport hosting direct flights from many destinations in Asia and Europe.

Its economy is centered on fishing, agriculture and a fast-growing tourism sector.

From March 2014, Vietnam has implemented a visa-free policy for all foreign visitors to Phu Quoc for a period of up to 30 days.