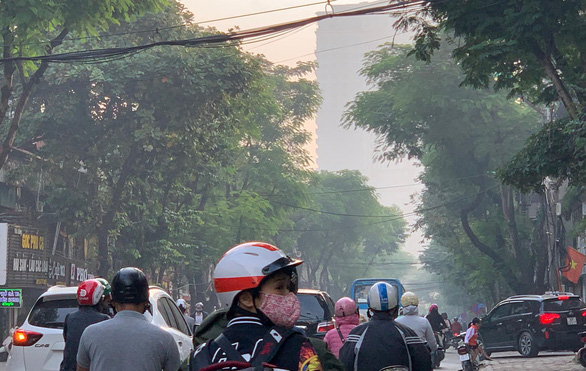 Air pollution in Hanoi soared to the most hazardous level since the beginning of 2019 on Tuesday morning, according to the Vietnam Environment Administration (VEA).

The Air Quality Index (AQI) recorded at one VEA-run monitoring station on Nguyen Van Cu Street in Long Bien District hit 341 as of 6:00 am.

At other locations in the Vietnamese capital city, AQI hovered above 200.

An AQI of 201-300 is considered dangerous to health, according to the VEA website.

Records from other independent air quality analysis systems, such as PAMAir, showed similar AQI levels, which are also the highest in 2019 to date.

The general public “should greatly reduce outdoor exertion” while sensitive groups “should avoid all outdoor activity,” the VEA advised.

Hanoi has experienced four air pollution spells since the beginning of 2019, but AQI records never climbed to such alarming levels as they did on Tuesday morning.

“With such levels, I think Hanoi should immediately issue warnings to its citizens so that they can protect themselves,” Tung said.

The VEA said on its website that temperature inversion is the main cause of the ongoing air pollution.

According to the VEA, the large difference between day and night temperatures in the Vietnamese capital city in recent days caused warmer air to be held above cooler air, a phenomenon known as inversion.

However, Dr. Tung said he does not accept the VEA's explanation.

“It is possible that a strong pollutant source in Hanoi or its vicinity is causing this,” the online news site VnExpress quoted Tung as saying.

The VEA forecast that the AQI in Hanoi will remain at “bad levels” for the next few days, especially at night and in the early morning, when temperature inversion will likely repeat.

Residents are encouraged to refrain from leaving windows open and wear facemasks when going outdoors, the VEA said.