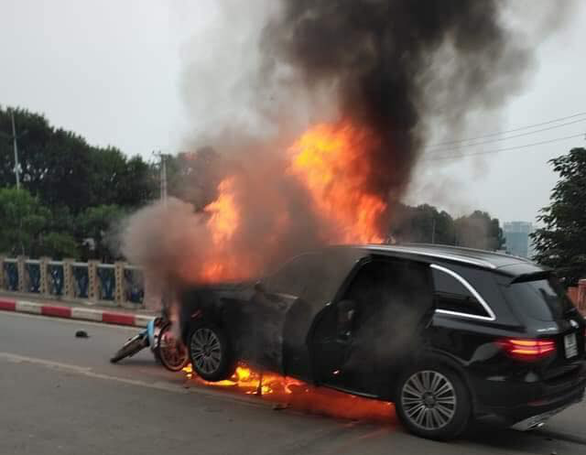 A female driver who fatally crashed her car into a group of two-wheeled vehicles, killing one, at an intersection in Hanoi on Wednesday morning has blamed the entire accident on her high heels.

Vu Thi Hong Thai, 47, a resident of Cau Giay District, was brought to the police station shortly after plowing her Mercedes into three motorbikes and one electric bicycle traveling in the same direction near the intersection of Nguyen Ngoc Vu and Le Van Luong Streets at around 7:20 am.

The car dragged a motorbike stuck on its front side for ten meters before coming to a complete halt.

Both the car and motorbike then caught fire and became engulfed in flames.

One woman was killed at the scene.

Two fire engines and dozens of firefighters were immediately dispatched to the scene to extinguish the fire.

At the police station, 47-year-old Thai told police officers that she had meant to slow down when she saw other vehicles in front of her, but admitted that she panicked and her high heels caused her to accidently slam on the accelerator instead of the breaks.

Police officers have yet to identify the female victim killed in the accident as her motorbike has been burnt to ashes.

Authorities say their plan is to attempt to identify the deceased owner of the bike by running the bike’s engine number in their system, as well as continue with their overarching investigation into the incident.