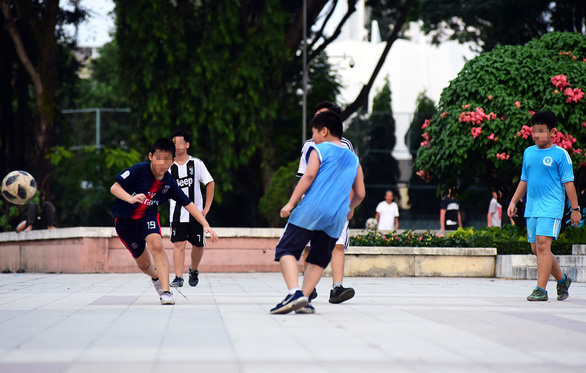 A middle-school boy in Ho Chi Minh City died after being hit by a ball while attending a football class on Saturday.

According to the Saigon General Hospital in District 1, N.P.Q.B., 12, was rushed to its emergency department with a cardiac arrest at around 7:30 am on Saturday.

B. had collapsed on the field after receiving the full force of a flying ball to his chest while the seventh grader was attending a weekend football class at the Sports Center of District 1.

B.’s family said the class was an extracurricular activity.

A male coach and B.’s family, who had observed the whole incident, ran to the boy’s aid after seeing him collapse but could not help him regain consciousness through first-aid.

The boy was therefore rushed to the Saigon General Hospital, where doctors attempted to resuscitate him for one hour before pronouncing him dead at about 9:00 am the same day.

Following the incident, many Vietnamese parents took to Facebook groups to express their concerns over whether they should let their children continue playing such sports as football, where injuries are common, despite their health benefits.

Discussing the issue with Tuoi Tre (Youth) newspaper, Nguyen Minh Tien, deputy director of the Ho Chi Minh City Children’s Hospital, agreed that the strong force of a ball hitting the body can cause injuries, even life-threatening ones.

However, Tien said children can learn to avoid such strong force by taking measures to guard themselves while playing sports.

Players would jump and slightly tilt their shoulders to dodge the strong force from the ball, Tien said.

Doctor Phan Vuong Huy Dong, vice-head of the Ho Chi Minh City Sports Medicine Association, advised that sports players pay attention to other factors such as the condition of the pitch to protect themselves from injuries.

Children should also be supervised and trained by adults when playing sports, Dong added.