Five police officers in Vietnam’s Mekong Delta have been treated for exposure to HIV after arresting a robber last month.

The police unit in My Tho City, Tien Giang Province, confirmed on Thursday they had captured Nguyen Hong Tai, 31, for robbing a local house in mid-December.

Local authorities have initiated legal proceedings against Tai and taken him into custody for two months to assist their investigation.

According to officers, Tai broke into the home of 51-year-old Nguyen Thi Tram at around 7:30 am on December 10.

The robber sneaked into the bedroom and stole three mobile phones and a bag containing women's underwear.

Tram caught him red-handed as he exited the house, but she eventually had to let him go after being threatened at knifepoint.

Tai headed to a nearby plantation to change to a new outfit, before stealing a motorbike and running away.

Following a probe, officers were able to locate Tai on December 14.

The suspect hurt his head as he tried to flee, before making the wound worse on purpose to make him bleed even more.

Tai then told the officers he was HIV positive to scare them away.

He was eventually apprehended, but the five officers taking part in the arrest suffered minor scratches on their arms and legs.

As Tai was later confirmed to be HIV positive, the officers has had to receive treatment for exposure to the virus. 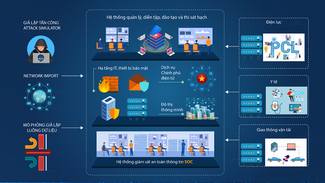