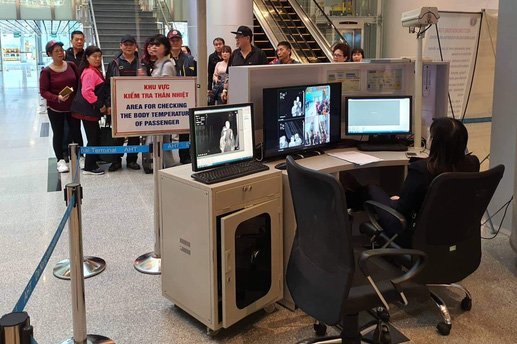 Twelve people, including seven Chinese nationals, have been put in isolation in the central Vietnamese city of Da Nang and are under observation for the new coronavirus as they all have fevers and recent contact with high-risk subjects.

The twelve patients, including seven Chinese, four Vietnamese, and one Czech, are being monitored at Da Nang General Hospital’s tropical diseases ward, a hospital representative said on Sunday.

One of them is a Chinese passenger from Hunan Province who landed at Da Nang International Airport on Saturday afternoon with a high temperature of 38.5 degrees Celsius.

The remaining 11 are tourists and local residents who have checked themselves into hospitals for fevers.

They all reported having been in contact with Chinese persons recently.

Samples of the 12 patients have been taken and sent to the south-central city of Nha Trang for testing.

A pneumonia outbreak, caused by a new strain of the coronavirus family that caused SARS and MERS, first surfaced in Wuhan City in December 2019.

The virus has spread to the U.S., France, Australia, South Korea, Japan, Singapore, Malaysia, Vietnam, and others, infecting more than 2,000 people globally.

Fifty-six people have died from the disease in China, Reuters quoted figures released by Chinese authorities on Sunday.

Two Chinese citizens are being treated at Cho Ray Hospital in Ho Chi Minh City after their coronavirus infection was announced on Thursday.

Last week, two Chinese passengers were put in isolation in Da Nang for pneumonia-like symptoms but were later discharged after doctors determined their conditions were not related to the coronavirus.

Fifty-two out of 218 visitors from Wuhan who entered Da Nang on Wednesday have left the central city for China as of Saturday, with the remaining visitors expected to return home by January 27, according to a local travel company’s executive.