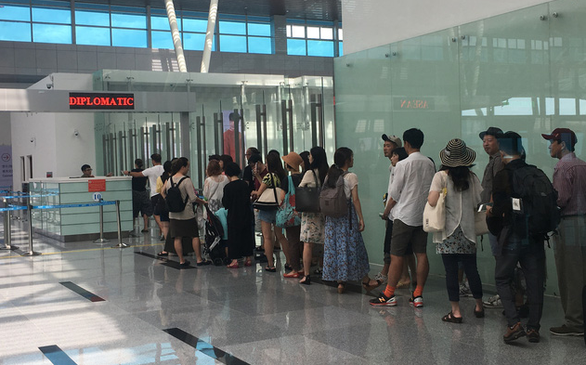 A special flight will take the last Wuhan visitors in a group of tourists landing in Da Nang last week to their hometown later on Monday, despite Vietnam's blanket flight ban and China’s lockdown of the new coronavirus-hit city.

A spokesperson of the travel company that brought 218 tourists from Wuhan to Da Nang on January 22 said that 166 of them would return home on a flight on Monday night.

The first batch of 52 visitors had been sent back to their hometown via different routes, as Vietnam has since January 23 suspended flights to and from Wuhan, where the novel coronavirus has killed at least 80 people and infected more than 2,700 others while spreading to many places around the world, including Vietnam.

The special flight will take off from Da Nang International Airport at 7:30 pm.

The plane carrying them will be disinfected in line with standards on blocking the novel coronavirus’ transmission before flying empty back to Da Nang.

The Wuhan visitors will return home as scheduled, as they bought a five-day-four-night tour to the central Vietnamese city.

Da Nang health officials have maintained that the visitors had showed no unusual health signs.

The Civil Aviation Authority of Vietnam has allowed some flights to take Chinese tourists back to Wuhan even though it had ceased all flights to and from there.

In particular, Vietjet operated four direct flights to Wuhan on January 24 and 27, with two departing from Da Nang and the others from Cam Ranh, located in the south-central province of Khanh Hoa.

Passengers on board the flights were in normal health, the Civil Aviation Authority of Vietnam said.

China had requested the flights, Vietnamese authorities said, although the Chinese government already locked down Wuhan, a city of 11 million and the epicenter of the coronavirus epidemic that first broke out in December 2019.

Vietnam has confirmed two positive cases since the outbreak.

The patients are being treated at Cho Ray Hospital in Ho Chi Minh City, one of whom is recovering well.

Thirty-nine patients are being isolated and under observation for the new coronavirus, including 13 in the northern region, two in the southern region, and 24 in the central region.

There is currently no Vietnamese citizen infected with the virus, health officials said.