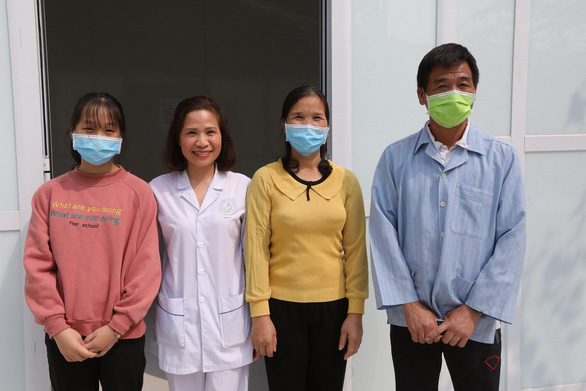 A 50-year-old Vietnamese man, the last patient being treated for the new coronavirus disease (COVID-19) in Vietnam, has been discharged from the hospital after a 15-day course of treatment.

Vinh, the father of recovered COVID-19 patient N.T.D., was hospitalized on February 12 with mild symptoms including a cough and runny nose.

Four members of the family, including Vinh, his wife, D., and another daughter, all contracted COVID-19 after D. returned home from a vocational training program in the central Chinese city of Wuhan, the epicenter of the viral outbreak.

The 23-year-old woman also allegedly spread the disease to a cousin, a neighbor, and the neighbor’s grandchild.

Fifteen days into treatment, Vinh was clear of all COVID-19 symptoms and tested negative for the virus three times on Sunday, Monday, and Tuesday.

As per treatment guidelines issued by the Ministry of Health, a COVID-19 patient is allowed to be discharged from the hospital only after their fever has ceased for at least three days and at least two samples, taken one day apart, test negative for the virus.

Vinh is now out of the hospital after meeting all of the above requirements.

His wife and two daughters had also recovered and been discharged from the hospital earlier.

Upon Vinh’s walking out of the hospital, his wife, P.T.T., sent her apology to those who were infected by her family.

“There was little information about the disease back then … My daughter unintentionally spread the disease to other people,” T. said.

The COVID-19 has killed 2,763 people and infected over 81,000 globally since it first hit the central Chinese city of Wuhan in December 2019, according to the South China Morning Post.

With Wednesday morning’s release of Vinh, all patients in Vietnam have been successfully treated and are out of the hospital.