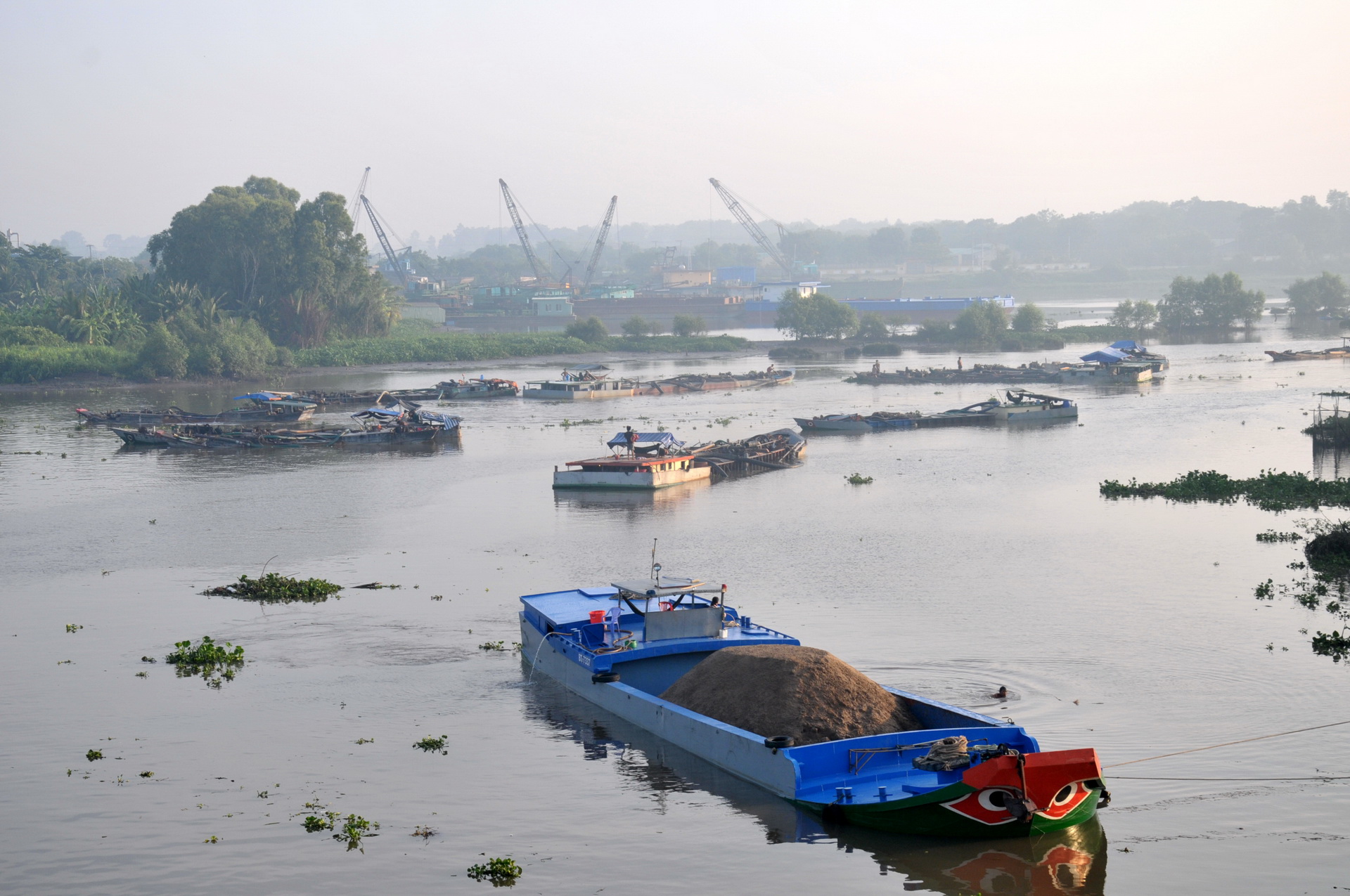 For many people in Vietnam, as well as surrounding countries, the Mekong Delta is incredibly important as any changes to the region and its related ecosystems can have drastic consequences.

Saline intrusion, which is the movement of ocean saltwater into riverine freshwater, has been one of the major issues of concern for residents in the Mekong Delta region, the scientific community who are interested in Mekong issues, and the Vietnamese government alike in the last couple of years.

For areas dependent on farming, such as those in the Mekong Delta, saline intrusion can be disastrous.

Though not a new phenomenon, it has been occurring earlier and reaching further inland over the last few years.

To grasp a better understanding of the problem as well as available courses of action to minimize its damage, Tuoi Tre News reached out to Eslami Sepehr, a senior researcher and advisor for Utrecht University and Deltares, a research institute based in the Netherlands.

Please introduce yourself and explain your involvement in the study of saline intrusion in the Mekong Delta. What did you observe during your field trip to the Mekong Delta?

I am a coastal engineer and (funny enough) before I started researching the Mekong Delta, I was a consultant in the dredging (sand mining) industry. Over the last five years, I have invested everything in my power to understand what is happening in the Mekong Delta. First, it was a research project, and I was approaching it from a practical point of view. However, when I visited Vietnam a few times and got to know the people, it became emotional. I started to care about the whole thing personally.

I have spent a lot of time in the Mekong Delta, traveling along its branches and enjoying the scenery of the Mekong over a lot of beers. It started with studying salt intrusion in particular, but after a while I started to realize that there are more complicated questions than just the physical processes.

Climate change is real and is hitting each and every community around the world. In this region, this year, the monsoon transition was earlier, and there were fewer tropical cyclones. But it is so essential to distinguish what climate change does and what is caused by humans. Historically, more or less every ten years there was a drought in the Mekong. Due to climate change, this phenomenon is now more irregular.

Last year, there was an early monsoon transition, which meant an early drop in the rainfall. This meant that during the wet season, less water reached the Tonle Sap Lake, so there was less water to combat salt intrusion during the dry season. This is what happens during any normal drought in the Mekong.

However, a few things have changed in the region over the last two decades. Firstly, due to upstream dam constructions, the water levels during the wet season in Cambodia are much lower than they were before. The floodwaters still pass the dams, but not like they once did. The dams minimize the number of bigger flood pulses, so water levels never reach high enough in Phnom Penh to be able to overflow to the Tonle Sap Lake and store water for the dry season.

Overall, this makes the system more vulnerable. While climate change is causing irregular processes, the system is much more susceptible to change. The commencement of Xayaburi Dam in October was the final bullet in the head of the system as it dampened the water levels further, which meant no water to the lake during a drought year, and eventually resulting in significant/earlier salt intrusion.

This was just about the upstream discharge or freshwater supply. I haven’t said anything yet about what happens in the delta itself. So, in any delta, salt intrusion is the response to the balance of upstream discharge, ocean forces (water level and tide), and the topology (geometry) of the rivers (bed levels, channel width/slope/length, etc.).

It’s important to note that rivers consist of water and sediment. They are both essential to the life of the natural system. It’s just that the changes in water are more easily noticed than sediment.

Unfortunately, dams not only kill the flood pulse, they also block sediment. Sediment for water is like humidity for air. When the air is dry, it gets its humidity from anything. That’s why people die in the desert. It’s not heat, it’s the loss of humidity to the thirsty air. The hungry river, deprived of its sediment by the dams, picks it up wherever and however possible. This means river bed erosion, and riverbank erosion. Analysis shows that the amount of sediment in the system has declined by 90 percent due to the dams.

At the same time, while the river is hungry and trying to catch sediment from wherever, sand mining is happening in humongous magnitudes. In the Mekong Delta, the amount of sand regularly extracted is a couple of times (between two and five times) more than the sediment supply. What does this mean? Accelerated river bed and riverbank erosion.

Can you explain why dams and sand mining are related to saline intrusion? Why does climate change not play a significant role?

From the three elements that could change salt balance in the Mekong Delta, freshwater supply is changing mainly due to the dams. At the same time, the rivers are getting deeper in the delta due to sediment starvation from the dams and sand mining.

Because of the deeper rivers, the tides are rising. The rising tides create a feedback loop to salt intrusion. Larger tides bring more salt into the delta. The larger tides also have other implications. They amplify erosion, and they also contribute to city flooding.

So, climate change impacts the system in two ways: rising sea level (by 2-3 millimeters yearly), and more wet season discharge and irregular drought. Meanwhile, human impacts result in no water in the Tonle Sap Lake, the delta subsiding by 10-20 millimeters per year due to excessive groundwater extraction, the river beds getting deeper by rates of 200-300 millimeters per year (2-4 meters in the last 15-20 years), and tides rising 20-30 millimeters a year due to river deepening.

For all of these reasons, when it comes to saline intrusion, the climate change impact is hardly five percent.

An animation illustrates how fresh and saline water mix with tides along the Dinh An estuarine channel in the Mekong Delta of Vietnam. Video: Eslami Sepehr

Saline intrusion seems to be unavoidable for the Mekong Delta, how do you think people can mitigate its impact, both in the short term and in the long term?

In the short term, during the current drought, people have to follow the government's guidelines since I know the government is working hard on managing the water resources. This means that there will be some compromise in agricultural production. With some simple measures, such as freshwater storage, household use may not be a problem.

But in the long term, businesses have to adapt since it seems like we cannot go back in time. The hydropower development doesn’t seem to be slowing down. Replacing the existing sand mining practices seems to be a timely process, and the sediment that is gone will not come back unless the dams are removed.

So, the only remaining option is convincing businesses to reduce agricultural water demand through modernization of agriculture practices and switch to salt-friendly measures like aquaculture, but only in a sustainable manner. Otherwise, the water quality issue will bite back even worse than salinity.

In the long term, what should Vietnam do to reduce the severity of saline intrusion?

Vietnam should first recognize that hydropower development and sand mining are like growing cancers, and at some point a price will have to be paid. So, first Vietnam should stop investing in upstream dams in Laos and Cambodia.

Next, alternative sources of sand have to be found. There is definitely a way to go around the existing problem, but first it has to be acknowledged. This is also something that Vietnam should do in coordination with the upstream countries through active diplomacy.

An animation illustrates how fresh and saline water mix with tides in the Mekong Delta of Vietnam along seven main estuarine channels. Video: Eslami Sepehr

How has the Netherlands maintained its fast growth while moving to completely ban sand mining?

The Netherlands, together with upstream countries like Germany and Switzerland, recognized sand mining as a major threat to the function of the river. Therefore, in the early 20th century, they started to look for alternative sand, and they found it in the ocean. Of course, it was more expensive to extract it. You need bigger ships to go offshore. You need more advanced equipment and more skilled human resources. But, with the existing technology, the costs can be reduced.

This is not to say that Vietnam can necessarily find its sand offshore, maybe it can be found inland. Sometimes, you don’t have everything you want, but, given the state of scientific advancement these days, if you approach it systematically, you can definitely achieve it. The problem with river sand is that it’s cheap (at first glance) and it’s high quality. But we have to consider all the land that is sliding in the river, all the houses that disappear, all the people that have to move to big cities and all the businesses that have to change or go down.