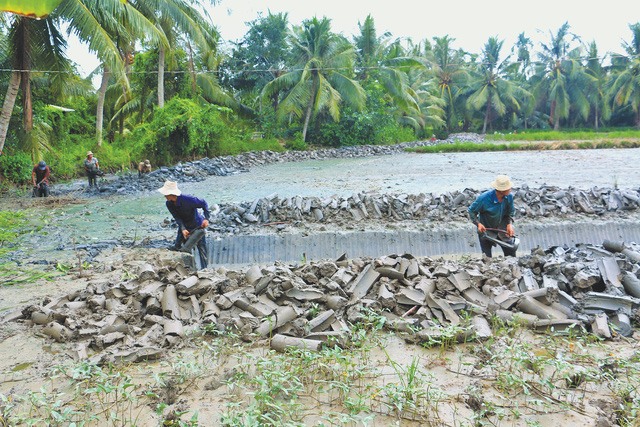 Sea water has flowed further inland in provinces along the coast of Vietnam’s south-central region and Mekong Delta, Nguyen Quang Dung – head of the country’s National Institute of Agricultural Planning and Projection – said at a workshop on Tuesday.

The intrusion was seen 30-40 kilometers from the coast in many southwestern areas, with the salinity ranging from 14.6 to 31.2 grams per liter, a little lower than the global sea average of 35 grams per liter.

The largest distance of encroachment was 90 kilometers, noticed along the lifeline Tien (Front) River, one of the two branches of the Mekong River in Vietnam’s territory.

Bac Lieu and Ca Mau are two provinces that are bearing the greatest brunt of the saline intrusion in the Mekong Delta as local daily life, rice farming and fruit growing are suffering from freshwater scarcity.

Ninh Thuan, a coastal province prone to severe droughts in south-central Vietnam, is experiencing salinity contamination of its groundwater, according to an investigation conducted by the Ecorem Asian Infrastructure Engineering (Ecorem AIEI).

Local residents had to switch to growing salinity-resistant crops and buy fresh water for household use.

Ecorem AIEI suggested at the workshop a pilot project to build wind power facilities that convert salt water into water fit for domestic and agricultural use in six affected provinces.