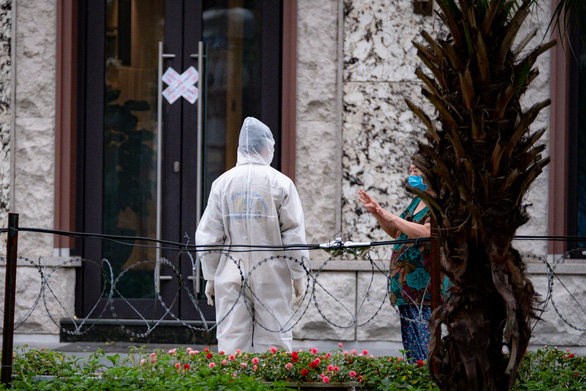 Three more cases of novel coronavirus disease (COVID-19) were recorded in Vietnam on Sunday night, taking the country’s total to 57, with 41 active infections.

The Ministry of Health said that it received a notice from the Pasteur Institute in Nha Trang, located in south-central Khanh Hoa Province, at 9:30 pm on Sunday confirming the 57th patient is a 66-year-old Briton.

The male patient arrived in Hanoi from London on board flight VN0054, operated by Vietnam Airlines, on March 9 and then came to Quang Nam Province in central Vietnam.

He showed COVID-19 symptoms so his sample was sent to the Pasteur Institute in Nha Trang for testing.

He was on the same London-Hanoi flight as a Vietnam Airlines attendant who was confirmed as Vietnam’s 46th patient on Friday.

The Briton is being treated in Quang Nam.

The 55th and 56th cases were recorded in Hanoi, bringing the total in the capital to 11.

He touched down at Noi Bai International Airport in Hanoi from the UK at 5:30 am on March 9.

Upon entry, he met up with two female friends who flew to the Vietnamese capital on another flight for a vacation.

The patient stayed at Hanoi Paradise Center Hotel at 22 Hang Voi, Hoang Kiem District, Hanoi and checked out on March 10.

He traveled to Sa Pa, a famous resort town in northwestern Vietnam, from March 10 to 13. He stayed at Mountain River Homestay Sapa in Ta Van, Sa Pa.

Then the patient returned to Hanoi and has stayed at Oriental Suiter at 58 Hang Dao, Hoan Kiem District from March 13 till present.

The Hang Dao People’s Committee was informed of his whereabouts and decided to isolate the Briton.

On Saturday, he was tested by the Center for Disease Control in Hanoi and the result was positive.

His test was confirmed by the National Institute of Hygiene and Epidemiology, located in the capital, on Sunday night.

He is being isolated and treated in stable health at the Dong Anh branch of the National Hospital for Tropical Diseases in Hanoi.

The 55th patient is a 35-year-old German man who boarded flight VN0018 to fly from France to Hanoi on Saturday.

He was diagnosed by the Center for Disease Control in Hanoi on Saturday and the National Institute of Hygiene and Epidemiology confirmed the diagnosis on Sunday night.

He is being isolated and treated in stable health at the Dong Anh branch of the National Hospital for Tropical Diseases.

Vietnam has confirmed 57 COVID-19 cases so far, with 16 having fully recovered and been discharged from the hospital by February 26.

The 41 active cases, having been confirmed since March 6, include 17 foreigners – mostly Europeans – and 24 Vietnamese.

It has announced that foreign patients have to pay for their treatment although their testing and quarantine fees are still waived.

No mortality has been reported in Vietnam to date.

Vietnam now bans arrivals from the Schengen Area and UK and suspends its visa-on-arrival policy for all foreigners.

The new policy will be in effect for 30 days from 12:00 pm Sunday, March 15, and will not affect arrivals for diplomatic or official purposes.

Vietnam will consider stop issuing tourist visas to visitors from the U.S. on a state-by-state basis, depending on the development of the epidemic in that country, its prime minister said.