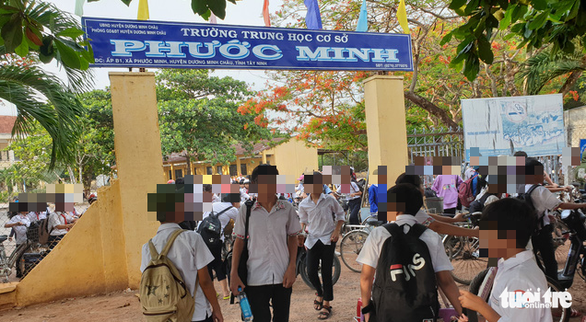 A male teacher at a school in Vietnam has asked for forgiveness and handed in his resignation after admitting to sexually abusing several of his male students.

According to a source, N.H.N., a biology teacher at Phuoc Minh Middle School in southern Tay Ninh Province, on Wednesday submitted a self-report confessing to sexually abusing four of his students, as well as his resignation letter, to the school board.

“I made a serious mistake. Please forgive me although I will not be able to forgive myself for the rest of my life,” N. wrote in his report.

According to the report, N. said he joined a social media network for LGBT people via a mobile app two years ago.

As N. found out that one of his male students was also on the platform, he asked to see the boy privately in a school laboratory.

The teacher then asked the student to help him adjust his pants’ zip, citing a hand pain. He also admitted to having sex with the boy.

N. repeated the same tactic with three other schoolboys in grades eight and nine.

The teacher admitted to making one of the male students watch a pornographic movie.

Statements from four of his victims have been collected by the school.

N. said in his self-report that he “had realized his mistake before the students reported the issue,” adding that he has been focusing on teaching since the second semester of the 2019-20 school year to make up for what he had done.

He claimed to have stopped using the LGBT social network.

“Please forgive me. Please look at me as a normal person and don’t despise me. Please be forgiving to me. [Your forgiveness] is the cure for my life,” he said.

N. has been suspended since Wednesday, the education bureau in Duong Minh Chau District, where the school is located, told Tuoi Tre (Youth) newspaper.

The case is now being handled by the district’s police, who took testimonies from the students involved under the supervision of their parents and lawyers for further clarification.

Molesting a person under 16 years of age is punishable by up to seven years in prison, while raping a person under 16 is eligible for up to 20 years behind bars if the perpetrator is responsible for the victim’s care, education, or treatment, according to Vietnam’s Penal Code.