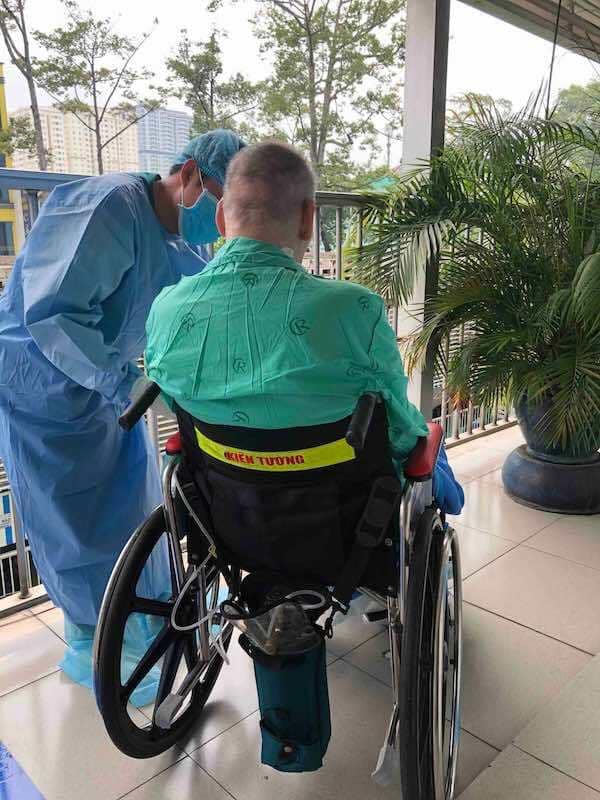 A British COVID-19 patient who was once in an extremely critical condition is now able to sit in a wheelchair to sunbathe daily with help from medical workers at a hospital in Ho Chi Minh City.

His health has been significantly improving during the past week when he was disconnected from ECMO, a form of cardiac and respiratory support outside the body, doctors at Cho Ray Hospital in District 5, where the patient is being treated, said on Thursday.

The Briton has no fever now while he has tested negative for the bacteria that had caused his lung infection.

Cho Ray doctors are helping him get off the ventilator which has given him breathing support.

The patient is completely conscious, able to remember his phone and iPad passwords after a two-month coma, can write on a board, and can use his phone.

His muscular strength is improving, enabling him to sit in a wheelchair to sunbathe with assistance from medical workers every day, Cho Ray doctors said.

He will continue being treated at the hospital though he has already tested negative for the novel coronavirus, which causes COVID-19.

The 43-year-old Briton, a Vietnam Airlines pilot, was confirmed as the country’s patient No. 91 following his diagnosis in mid-March.

He was admitted to the Ho Chi Minh City Hospital for Tropical Diseases on March 18 with a damaged right lung.

He was on the verge of death many times and doctors once thought only a lung transplant would probably save him.

On May 22, he was transferred to Cho Ray Hospital from the Ho Chi Minh City Hospital for Tropical Diseases after being declared free of the virus.

He has been making a remarkable recovery since.

Vietnam has reported 332 COVID-19 cases as of Thursday night, with 321 having recovered and no death, according to the Ministry of Health.