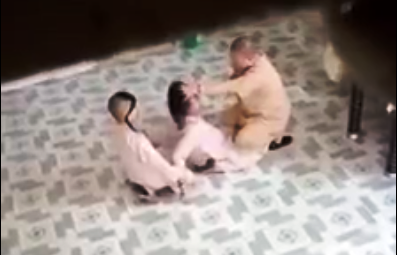 A nun at a pagoda in Ho Chi Minh City has been relieved of her position at the religious place for three months after being caught on camera beating a young girl who is one of her disciples.

Thich Nu Hanh Thao, a nun at Long Nguyen Pagoda in District 4, was filmed physically abusing the young girl in footage that went viral on social media on Thursday.

In the two-and-a-half-minute video, the nun was shown grabbing the disciple by the hair and repeatedly slapping the girl while another young disciple held down the victim’s arms.

The nun was heard asking the young girl why she had lied to her.

She later grabbed a wooden stick and threatened to hit the young disciple with it, but eventually stopped as the crying girl begged her for mercy.

The nun ended the punishment with a stern warning against lying to her again.

Local authorities said that Thao has been raising two female disciples, T.V.K.N. and T.N.T.V., at the pagoda.

N. recently committed some wrongdoings including lying to the nun, leading to the incident as caught on camera.

The violent punishment was filmed by a person working at the pagoda.

On June 9, the Buddhist Sangha representative board in District 4 summoned Thao for a working session regarding the incident.

The board later relieved the nun of all her duties at the pagoda for three months.

The young disciple’s mother said she had asked Long Nguyen Pagoda to raise and educate her daughter due to the family’s financial difficulties.

H. is considering bringing her daughter back home or asking another pagoda to take care of the girl.