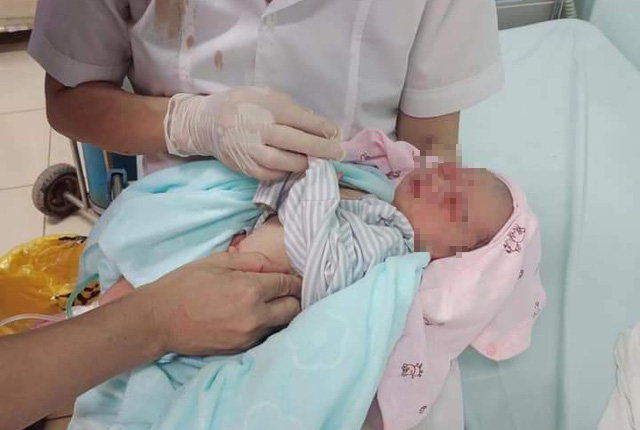 Punishment hovers over Hanoi mother who abandoned newborn for 40 hours

A woman in Hanoi may face an administrative fine and even a jail term for abandoning her newborn near a deserted manhole for 40 hours in the capital city’s sizzling heat this month.

Residents of Thanh My Commune in Son Tay Town, Hanoi found the baby boy, Nguyen Van An, near an abandoned manhole in the locale around 3:30 pm on Monday.

At the time, his naked body was covered in ant stings while maggots had infested his ears, eyes and mouth.

After being rescued, the child was immediately tended to by health workers at Thanh My Medical Center in cooperation with local police and public officers.

Luckily, An was hospitalized soon enough to keep most of his organs unharmed, despite an initial diagnosis of corneal and neonatal infections.

According to T.’s account, she went on a weekend trip to Son Tay by bus on June 6. She found out that her water broke at around 11:00 pm the same day and decided to deliver the baby all by herself.

Fearing that her current financial situation was inept to raise a child, T. left her baby at the abandoned manhole at the rear of Mau Temple then returned to downtown Hanoi.

By the time people rescued the baby, he had gone 40 hours in the sizzling heat of Hanoi without any clothes or food.

News that authorities had located the boy’s mother quickly incurred public concern, with many people expressing revulsion at the woman’s lack of maternal love for her own child.

Some called for a corresponding punishment to deter similar acts in the future.

“One who delivers [a baby] but cannot take care of the child should at least leave the child at a discernible place so that someone can come to pick [the baby] up. In this case, she deliberately left the child to die. She should be tried for attempted murder,” one reader of Tuoi Tre (Youth) newspaper commented on the situation.

Lawyers consulted by Tuoi Tre said charges can be pressed against the mother as the act of abandoning one’s newborn child is deemed dangerous to society and punishable by Vietnamese law.

Article 94 from the Penal Code states that a mother who abandons her own newborn child within the first seven days of birth under the influence of obsolete beliefs or due to a special objective circumstance, leading to the child’s death, shall face a penalty of up to two years’ community service or between three months and two years’ imprisonment.

Acts of newborn abandonment that do not constitute a criminal violation under Article 94 can still be subject to an administrative fine of VND5-10 million (US$215-430), according to a 2011 government decree.