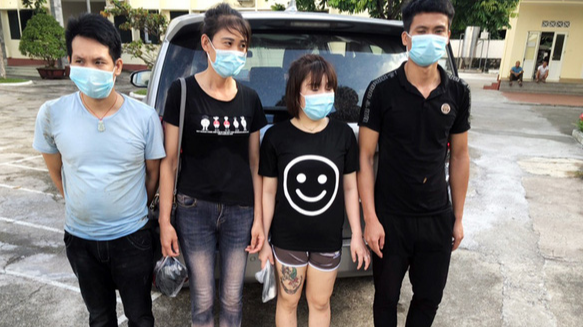 Eight people, including two children, who swam across a river in a bid to enter Vietnam from China illegally have been found and quarantined by border guards in the northern Vietnamese province of Quang Ninh.

According to the border guards in Hai Hoa Ward of Mong Cai City in Quang Ninh, they chanced on four illicit migrants at the border marker 1373 (2)-700 at around 3:15 am on Saturday and placed them in quarantine in collaboration with a local novel coronavirus disease (COVID-19) task force.

In their initial confessions to the functional forces, the four said that they had previously illegally exited Vietnam to work at a lumber mill in Dongxing City in Guangxi, China.

As Chinese authorities have recently beefed up inspections to arrest and handle Vietnamese nationals illegally residing in their country, the four made an illicit attempt to return to Vietnam.

They swam across the Beilun River — or Ka Long River in Vietnamese — which runs along the last stretch of the China-Vietnam land border between Guangxi and Quang Ninh.

As they reached the Vietnamese side, the four were found and held.

The functional forces in Quang Ninh booked the case and took the four people for medical examination before placing them under quarantine at a facility in Mong Cai City as per the current Vietnamese regulations on COVID-19 prevention and control.

The two adults were identified as Nguyen Hai Dinh, 55, and Nguyen Thi Hanh, 36, while their two children are aged one and four.

The family hail from the northern province of Thai Binh.

Dinh confessed to the functional forces that the family had legally completed customs procedures at the Mong Cai International Border Gate to enter Dongxing City for him and Hanh to work as paid laborers last November.

On Friday, they traveled on motorbike taxis from Dongxing to near the Lihuo Border Gate, which connects with Bac Phong Sinh Border Gate on Vietnam’s side, and swam past the Ka Long River before being found.

The whole family has undergone health checks and is now placed in a COVID-19 quarantine center in Mong Cai City.

Vietnam has made it mandatory for all arrivals to be quarantined for at least 14 days after entry for COVID-19 monitoring, with those failing to do so facing an administrative fine of VND10 million (US$430).

Those who infect others as a result of their disregard for disease prevention measures can be criminally charged under Article 240 of Vietnam's 2015 Penal Code, which carries a maximum jail term of 12 years, according to the country's top public prosecutor.