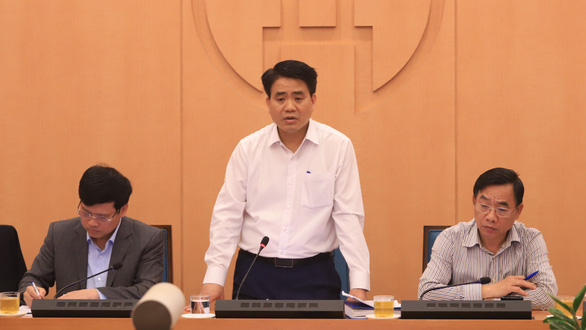 Authorities in Hanoi are asking citizens for their opinions on nominating the municipal chairman for Vietnam's first-class Labor Order, a prestigious honor, for his role in the capital city’s effective prevention and control of novel coronavirus disease (COVID-19).

Hanoi chairman Nguyen Duc Chung is among two individuals and four groups poised to be nominated for their roles in the capital city's COVID-19 response.

Chung is the head of the municipal Steering Committee for COVID-19 Prevention and Control.

The other individual is municipal vice-chairman Ngo Van Quy, who is Chung’s deputy in the COVID-19 task force.

Chung, together with the collective Hanoi citizens and officials, is nominated for the first-class Labor Order.

Quy, the Vietnam Fatherland Front Committee of Hanoi, the citizens and officials of Dong Da District, and Vietnam’s leading multi-sector conglomerate Vingroup are proposed to be nominated for the third-class Medal of Labor.

In addition, 44 other groups and 29 more individuals were also suggested to be nominated for certificates of merit given by Prime Minister Nguyen Xuan Phuc for their contributions during the pandemic.

Vietnam’s Labor Order, established in 1950, is conferred by the State President on individuals or groups who have recorded outstanding achievements in labor, creativity or national construction.

There are three grades of the award, with the first-class Labor Order being the most prestigious.

Hanoi has received praise for basically winning the fight against COVID-19 thanks to its drastic measures to contain outbreaks.

The city successfully controlled two large outbreaks at Bach Mai Hospital in Dong Da District and Ha Loi Village in Me Linh District, where about 60 infection cases in total were detected.

Local authorities also timely sampled and quarantined all people in Dong Cuu Village in Thuong Tin District after a patient had been discovered there, nipping a possible outbreak in the bud.

Hanoi has reported 121 COVID-19 cases so far, 117 of whom have recovered. Only four patients remain in treatment in the capital city.