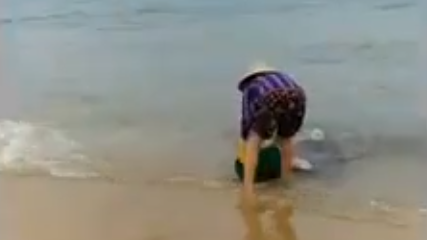 A video of a woman trashing a beach while challenging the person who recorded her action has sparked condemnation in Vietnam.

The woman was caught emptying a waste bin on Xuong Ly Beach in Nhon Ly Commune, Quy Nhon, the capital city of Binh Dinh Province in the south central region.

The video also shows an actual garbage can just 30 meters from where the woman was dumping hers.

After emptying her bin, the woman seemed to be trying to fill it up with sand to bring back to her home.

The tourist who captured the video asked the woman to stop and threatened to report her action to local authorities, to which she replied, “Let’s see what they can do.”

A woman dumps garbage into the ocean at a beach in Quy Nhon City, Binh Dinh Province, Vietnam in a supplied video.

It only took a few hours before the video was uploaded to social media and went viral, igniting fury amongst netizens shocked by the woman’s selfishness and disregard for the environment.

“She should be punished as an example to others. Maybe she should be forced to clean up the beach for a month. The video clip should be used to identify her and hold her responsible,” one comment on the video read.

The woman in question has been identified as Dinh Thi Hien, a 56-year-old from Ly Hoa Hamlet in Nhon Ly Commune, Nguyen Tan Dung, chairman of the commune, confirmed to Tuoi Tre (Youth) newspaper.

“Her mindless actions have sabotaged our environment. We’re currently working to bring the woman in and punish her so that we can deter others from committing the same crime,” Dung said.

Nhon Ly is one of the province’s major tourist destinations so trashing it hurts both the local environment and tourist industry, said Le Thi Vinh Huong, deputy director of the Binh Dinh Department of Tourism.

“The tourism department has asked local authorities to find a strict resolution for the incident,” Huong said.

In light of the incident, the department is also calling on local residents to act as 'tourism ambassadors' for the area, meaning individuals should take responsibility for protecting the landscape, culture, traditions, and image of Binh Dinh.