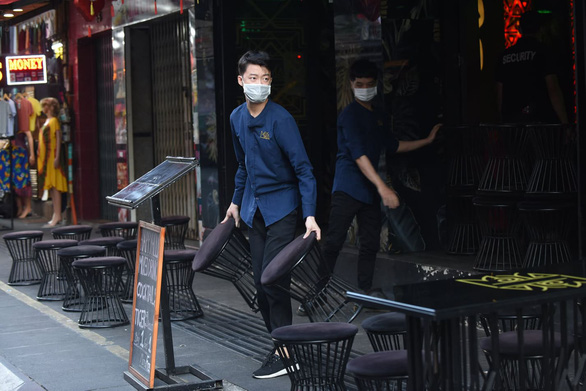 Saigon orders bars, discos to close down over COVID-19

Ho Chi Minh City authorities on Thursday ordered bars and discos to shut down from Friday until further notice amid new COVID-19 developments.

District-level administrations are required to be on high alert as a new wave of coronavirus cases has hit Vietnam since last weekend, the People’s Committee said Thursday in an urgent dispatch signed by deputy chairman Le Thanh Liem.

The committee asked that people wear face masks in public or on public transportation, take safety measures like washing hands with soap or sanitizer, and keep a distance in social interactions.

Crowded events like festivals, fairs, investment promotion conferences, and other non-urgent meetings have to be ceased while people are warned against gathering in big groups at weddings or funerals, according to the dispatch.

Gatherings of more than 30 people outside schools and hospitals are banned.

Bars and discos are required to shut down.

Teleconferences are encouraged whereas only essential meetings should be held physically with safety coming first.

The dispatch will be in effective from Friday until further notice.

Vietnam has reported 48 community-based cases, all traced back to Da Nang, since Saturday last week, after having gone 99 days without a documented local transmission, according to a Tuoi Tre News count. Fourteen such cases were recorded on Thursday.

Thirty-four of the 48 are in Da Nang, eight in Quang Nam, one in Quang Ngai Province, two in Hanoi, two in Ho Chi Minh City, and one in Dak Lak.

About 21,000 people have returned to Hanoi from Da Nang over the past days while the number in Ho Chi Minh City is 18,000.

Both cities are aggressively tracing these for coronavirus testing.

Enhanced social distancing has been imposed on the entirety of Da Nang, the country’s epicenter now, since Tuesday.

The Southeast Asian country has confirmed 464 infections as of Thursday night, with 369 recoveries and zero deaths, according to the Ministry of Health.