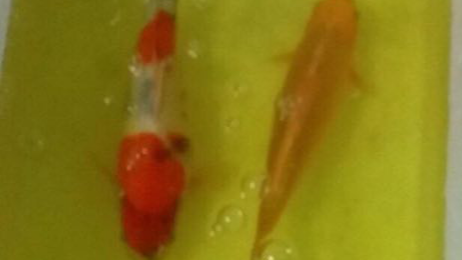 Two male thieves broke into a house in the central Vietnamese city of Da Nang and took away seven ornamental koi carp worth around VND100 million (US$4,300) from the homeowner’s pond.

On Monday, police officers in Hoa An Ward transferred two suspects to their higher-rank colleagues in Cam Le District, Da Nang for further investigation into suspicion of theft.

A 35-year-old resident, Nguyen Le Hoang Dung, told local police on Monday last week that someone had broken into his front garden and made away with seven valuable koi carp.

The alleged thieves admitted that they had sold two out of the seven koi carp for VND1.5 million ($64), way below their actual market value.

Among the remaining five carp, three died waiting for a buyer, so the men made two of them as grub for drinking and threw away the other.

Police officers were able to recover four of the carp, including two under the men’s possession and two from the previous buyer.

Koi fish are colorful, ornamental versions of the common carp and can grow up to three feet, or 90 centimeters, according to the Associated Press.

This type of fish has been a usual target among thieves in Vietnam and other countries, due to their value depending on various factors, such as size, age, markings, and lineage.

The U.S.-based Business Insider reported that the most expensive koi fish ever sold was worth $1.8 million at the All Japan Koi Show in 2017.

Koi were originally raised in Japan in the 1700s when rice farmers first began breeding them for their distinct colors and patterns.