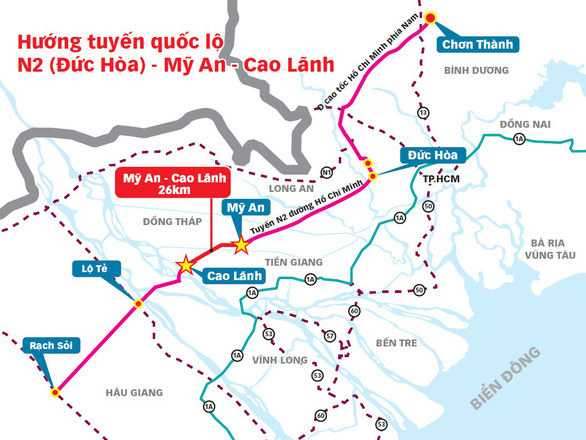 Vietnam’s prime minister has approved a proposal by the Ministry of Planning and Investment and the Ministry of Finance to construct a key road in the Mekong Delta using official development assistance (ODA) loans from South Korea.

A total of US$166.47 million in untied ODA loans will be taken from the Korea Economic Development Cooperation Fund (EDCF) via the Export-Import Bank of Korea (Keximbank) for the My An-Cao Lanh road project in Dong Thap Province, according to the proposal.

The loan is expected to be paid off within 40 years, including a ten-year grace period, with an annual interest rate of 1.5 percent on the outstanding debt and a withdrawal fee of 0.1 percent.

The 26-kilometer My An-Cao Lanh road will connect Dong Thap’s My An Town and the provincial capital city of Cao Lanh.

It is part of a bigger project to build a route connecting Vietnam’s southeast provinces with the Mekong Delta without the need for commuters to pass through Ho Chi Minh City.

The prime minister’s approval will allow the Ministry of Planning and Investment to notify Keximbank of the project so that it can consider funding and prepare for its next steps.

The two ministries will also work with the administrations of Long An and Dong Thap Provinces in the Mekong Delta and other relevant agencies and organizations to produce a pre-feasibility study report on the project and submit it to the prime minister, who will give in-principle approval on its development in accordance with current regulations.

The My An-Cao Lanh road will include four lanes measuring 15.5 meters in total width.

The total required investment for the project is estimated at more than VND4,524 billion ($193.71 million) and will be reconfirmed when there is a technical assistance consultant assigned to work out a more detailed estimate.

The South Korean ODA loan will fund the majority of the development cost while the rest shall be provided for by the state budget.

The project is expected to kick off as soon as an ODA agreement enters into effect, with construction poised to last from 2021 and 2024.

The My An-Cao Lanh road is hoped to improve connectivity and maximize the efficiency of other road infrastructure already developed in the Mekong Delta region.

Upon completion, the road will shorten journeys to the Mekong Delta from southeast and Central Highlands provinces.