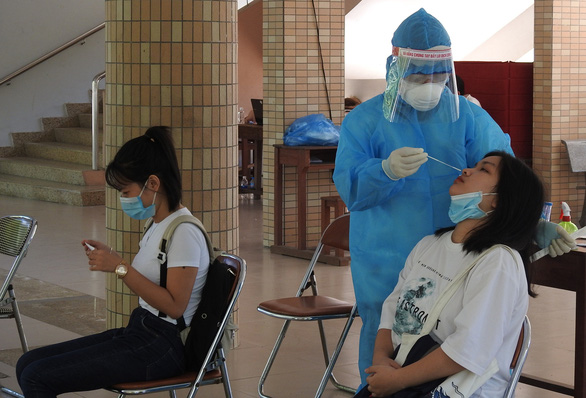 Da Nang to test representatives of 60,000 households for COVID-19 within five days

Authorities in Da Nang will screen representatives of 60,000 households for COVID-19 in the next five days, starting on Thursday, after they have already finished testing one-fifth of the city’s population.

This mass screening is meant to trace any undetected coronavirus case in the community, Ngo Thi Kim Yen, director of the Da Nang Department of Health, said on Wednesday.

On Thursday, local medical centers will start testing representatives of 60,000 households – equal to 30 percent of Da Nang’s total – that have never been screened for the virus since the pathogen re-emerged in the beach city late last month, Yen added.

Each household will send a representative to be screened, she elaborated, further explaining that if the person’s test result comes back positive, the household will be isolated and the remaining members will be tested.

The screening is expected to be complete within five days.

Da Nang, a touristy beach city, hopes to have a comprehensive assessment of the outbreak situation, which will form the basis for its plan to ease social distancing restrictions on Saturday, Yen said.

Medical facilities in Da Nang can take 14,000 samples a day, she added.

They have tested around 228,000 people, or one-fifth of Da Nang’s population, since July 25, when the city reported the first domestic case after Vietnam had spent 99 days recording zero locally-transmitted infections.

The Southeast Asian nation has logged 550 local cases since that date, most linked to the coastal city, according to the Ministry of Health.

Vietnam has documented no new community-based infections for the last four days, with the national tally remaining at 1,044 cases, including 690 domestic infections, 735 patients having recovered from the respiratory disease, and 34 having lost their lives.