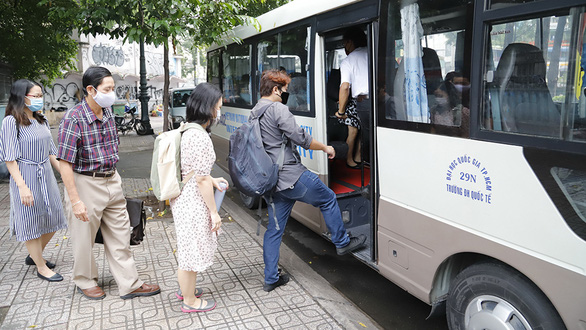 The establishment of the creative and highly interactive urban area in eastern Ho Chi Minh City is expected to solve the traveling dilemma of commuters to the Thu Duc campus of the Vietnam National University – Ho Chi Minh City (VNU-HCM) as well as white-collar workers of the surrounding facilities.

Spanning over a 643-hectare area of outlying Thu Duc District under Ho Chi Minh City, the Thu Duc campus of VNU-HCM houses some 10,000 lecturers, 1,000 of whom hold a PhD or Professor title, alongside roughly 100,000 students.

At 6:00 am, several lecturers are present at the downtown facility of VNU-HCM in District 5 and ready to board a shuttle bus to the Thu Duc campus. Some are chewing a loaf of 'banh mi', or Vietnamese sandwich, they have bought on the way there while others are reading or preparing for their lectures.

The 20-kilometer distance has become a familiar routine to several VNU-HCM staffers. Nguyen Du Sanh, a biology professor living in District 7, is one of them.

To board the shuttle bus, which departs at 6:30 am, Sanh often leaves home at 5:30 am to arrive at the pickup point in District 5 on time.

According to Sanh, he has been commuting from District 5 to Thu Duc District for almost 40 years. After 1975, professors of the institution – then referred as the General University – have been traveling from home in the downtown to the outlying campus every day.

As the bus service was unavailable at that time, they had to use their own vehicles and encountered numerous disadvantages such as gasoline running out and breakdowns. Without a mobile phone, they had to find the nearest telephone booth to seek assistance from other lecturers in the university.

“Life has improved greatly now, but I still wish I could go to work by metro train every day. It is very flexible and convenient,” Sanh said.

"Many lecturers only have three periods, lasting 45 minutes each, but still have to arrive at the downtown campus early, board the shuttle bus to the outlying campus, and then wait for other colleagues to board the bus home.

"A developed transport system at the new urban area would help lecturers have a more flexible timetable."

Two buses depart from the downtown in the morning and return at noon. They repeat the journeys once more in the afternoon. Other institutions under VNU-HCM adopt the same bus system.

Nguyen Tuyet Phuong, a chemistry professor at HCMUS, complained about the commuting issue.

As the workplace is too far, she and her husband – who is also a lecturer working in Thu Duc – have to rotate their working schedules so that one of them is always at home for childcare duties.

“Sometimes, we had to ask our relations to take care of my child. During the COVID-19 pandemic, some lecturers have no choice but to bring their children with them,” Phuong said.

Phuong travels to Thu Duc around three times a week on average, but sometimes she has to make up to five trips weekly.

Compared with personal vehicles, buses are favored by lecturers as they give them rest time and ensure safety on the busy Hanoi Highway.

“Though shuttle buses are convenient and safe, they are rather time-consuming. I have to spend two hours on a trip to Thu Duc. That amount of time could be used to do a lot of things,” she said.

Tran Anh Son, deputy head of the faculty of mechanical engineering under VNU-HCM’s Ho Chi Minh City University of Technology (HCMUT), said he has two choices of commuting: either from HCMUT’s main campus in District 10 to Thu Duc by shuttle bus, or from his home in District 12 to the outlying campus by motorbike.

He chooses the latter as he can travel less. However, on days he has to be present at the two campuses, the former route is the best solution.

“The university provides much support for lecturers, but I think it is rather costly to maintain the shuttle bus service,” Son said.

Huynh Van Chan, head of the faculty of social work under VNU-HCM’s University of Social Sciences and Humanities (HCMUSSH), said ridesharing is safe but inflexible.

For this reason, he chooses to ride a motorbike to work as this way enables him to do something in Thu Duc after working hours, despite the distant and arduous traveling.

Not mearly for VNU-HCM staffers, new housing projects are needed to provide accommodations for workers of neighboring high-tech zones and the new financial center in Thu Thiem New Urban Area. International experts at these institutions require high living standards, for both short and long stays.

According to Tran Van Muoi, deputy chairman of the Vietnam Association of Architects, lodging space for experts is a key factor in the design of the eastern creative urban area of Ho Chi Minh City.

The locations of residential areas depend on the master plan of the local government, Muoi said, adding that it is necessary to ensure safety, social order, environmental standards, and air quality in these areas.

Furthermore, long-term services and facilities for the experts should also be taken into account, like educational establishments for their children, access to medical and entertainment services, and others.

It is anticipated that the population of the eastern creative urban area will reach 1.5 million in 2030 and 1.9 million in 2040, provided that the annual growth rate is kept at 2.3 percent.

“People will not choose a polluted, noisy, dusty, and unsafe place for their children. If safe and sound living conditions are not guaranteed, it is difficult to attract skilled workers to the new urban area,” Muoi remarked.