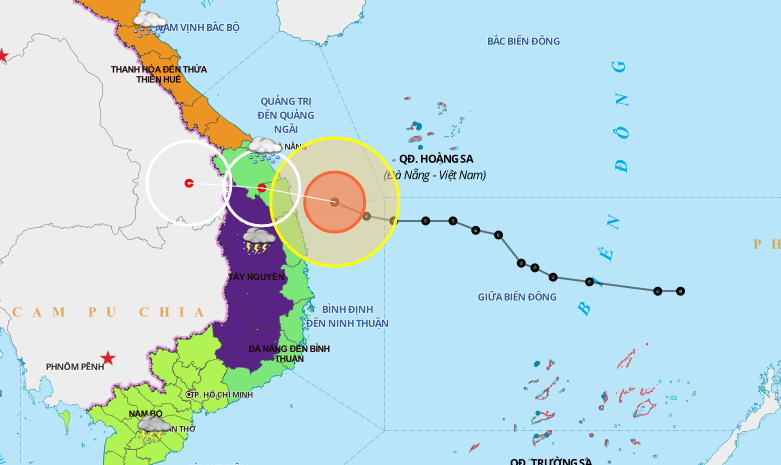 A tropical depression in the East Vietnam Sea has evolved into Storm Linfa and entered the maritime area off central provinces, the National Center for Hydro-meteorological Forecasting (NCHF) reported.

Storm Linfa, the sixth to hit Vietnam this year, was located near the coast between central Quang Nam Province and south-central Binh Dinh Province as of 9:00 am on Sunday.

The storm is expected to travel westward at 25 to 30km per hour in the next three hours and make landfall between Quang Nam and Quang Ngai Provinces.

Storm Linfa will continue heading west and weaken into a tropical depression.

Due to the combined effects of the storm, a tropical convergence zone, a cold spell, and downpours are forecast to hammer central provinces from October 11 to 13.

The highest rainfall will be recorded at 400-600 millimeters in the localities from Thua Thien-Hue Province to Quang Nam Province.

In Quang Tri and Quang Ngai Provinces, average rainfall will be at around 300-500 millimeters.

Rain at 200-400 millimeters will lash Quang Binh, Binh Dinh, and Phu Yen Provinces during this period.

In Ha Tinh Province and the northern part of the Central Highlands, rainfall will be at 200-300 millimeters.

The military has mobilized more than 200,000 soldiers to assist local residents in coping with the storm and consequences caused by torrential rain and flooding.

According to Hoang Phuc Lam, deputy director of the NCHF, two new tropical depressions are expected to form in the East Vietnam Sea between October 11 and 20 and potentially to develop into storms.

The routes and developments of the new storms will be affected by two cold fronts that will appear on October 14-15 and October 17-18, Lam elaborated.

These new storms are likely to head toward central Vietnam, the weather official said, adding that heavy downpours and floods may linger in the region over the next 10 days as a result.