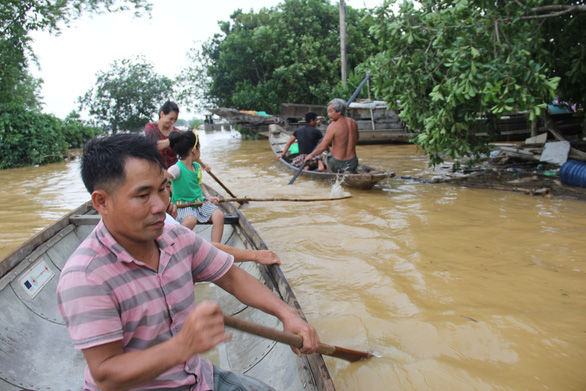 As heavy rains swept through Quang Tri Province, local resident Nguyen Van Ai maneuvered his small boat through the area’s flooded streets to rescue dozens of his neighbors from the rising floodwater.

Late last week, residents in the province’s Vinh Phuoc quarter found themselves scrambling for safety after floods struck their neighborhood for the second day in a row.

Pham Thi Mien, a 65-year-old resident, was just one of the many lucky enough to be saved by Ai after being trapped in her home by the storm.

Mien had been trying to move her chickens to a higher level in her house when water levels reached her waist.

With her daughter caring for a relative at Hue Central Hospital in Thua Thien-Hue, Mien found herself trapped and alone.

"When I finished saving the chickens, water flooded the terrace and the whole area filled up like the sea,” Mien said.

“It was fortunate that Ai and a few young men in the village heard me shouting for help.”

Ai, 40, was given his boat several years ago by an NGO as part of a program to support workers in Quang Tri, located in central Vietnam.

Though the boat spends most of the year in storage, it has become an integral tool for ferrying stranded residents to safety each flood season.

During this particular flood, nearly 20 households in the village found themselves relying on Ai’s boat to carry them to safety, though rough waters often mean only one resident at a time can safely board the vessel.

“Two households in the village have been able to stay in their houses, but the rest have had to depend on my small boat to bring them somewhere dry,” said Ai.

According to Ai’s wife, many of those saved were senior citizens.

When Ai finally returned home at dawn on October 10, he found that his own herd of cattle and tools he needs for his job as a painter had been swept away.