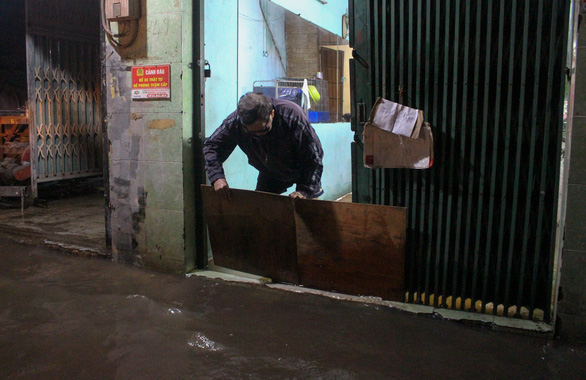 Many households in low-lying areas in Ho Chi Minh City saw their lives turned upside down on Monday as tidal flooding kept rising, going against previous forecasts that the situation would improve the same day.

The Southern Hydro-meteorological Center earlier had projected water levels to peak at 1.66 meter at Nha Be and Phu An Station on Monday. However, the levels reached 1.67 meter and 1.68 meter at the two stations, respectively, in the evening.

As witnessed by a Tuoi Tre (Youth) correspondent, Tran Xuan Soan Street in District 7 was inundated from 5:30 to 7:30 pm, causing many vehicles to experience engine failure.

L.V.T, a resident living on Tran Xuan Soan Street, said the flooding was worse than the previous day.

Sewage water from canals flowed into his house, bringing stench on Sunday. The odor became milder the next day, he said.

His neighbor H.V.M. suffered the same situation as weather forecasts turned out to be wrong.

As many houses in his neighborhood were lower than water level, residents had to barricade their gates with tarps and scoop water out of the house.