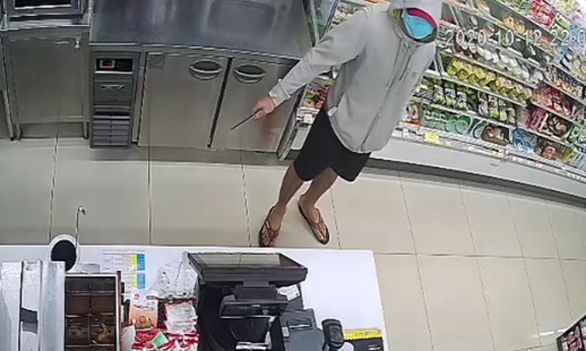 Police in Tan Phu District, Ho Chi Minh City have arrested a suspect for holding up a local convenience store with a knife.

The Tan Phu District police division confirmed on Friday that they had apprehended Pham Ngoc Anh Tuan, 23, a native from the Central Highlands province of Dak Lak living in the district, for an investigation into an armed robbery that took place on the night of October 12.

According to preliminary information, a man wearing a face mask, a hoodie, and a red cap entered a Ministop convenience store at around 9:50 pm on October 12 on Au Co Street in Tan Son Nhi Ward.

The man wielded a knife to threaten two store employees, took VND2.5 million (US$108) from the cashier’s drawer, and ran away.

Police launched an investigation based on CCTV footage and were able to arrest Tuan.

At the police station, Tuan admitted his wrongdoing.

Armed robbery is punishable by between seven and 15 years behind bars in Vietnam, according to the country’s Penal Code.