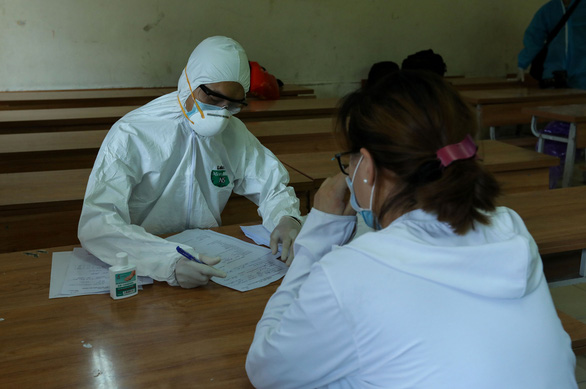 The Ministry of Health confirmed three imported cases of COVID-19 on Tuesday, including two Indian experts who had flown to Vietnam with 18 other fellow patients.

The three cases were quarantined upon arrival in the Southeast Asian nation as per local rules, the health ministry noted.

The two Indian experts are 34 and 41 years old.

They arrived at Tan Son Nhat International Airport in Ho Chi Minh City from India on board flight 6E9471 on October 6.

The duo were quarantined in Dong Thap Province, located in the Mekong Delta.

They are being isolated for treatment at the Sa Dec General Hospital in Dong Thap.

Eighteen other passengers on the flight 6E9471 had been diagnosed with COVID-19, including 14 already treated in Dong Thap, one in Dong Nai Province, and three in Ho Chi Minh City.

The third patient confirmed on Tuesday is a 22-year-old Vietnamese who has a registered address in Dong Da District, Hanoi.

The man landed at Tan Son Nhat from France aboard flight VN5010 on October 21.

He was sent to a quarantine center managed by the military in Ba Ria-Vung Tau Province, about 100km from Ho Chi Minh City.

His second coronavirus test came back positive on Monday. He is being treated in Ba Ria-Vung Tau.

Six other cases had been recorded on the flight VN5010, all isolated in Ba Ria-Vung Tau.

The health ministry announced one recovery on Tuesday, taking the total number to 1,062.

Vietnam has documented 1,172 COVID-19 patients so far, with 35 virus-related deaths.

At the time of writing, the country is quarantining 14,777 people who came into close contact with infected patients or made an entry from outbreak-hit regions, according to the ministry’s data.

The health ministry has warned that the pandemic may worsen in the coming winter, underlining that people wear face masks in public, sanitize hands, keep a safe distance, avoid gatherings, and declare health status.