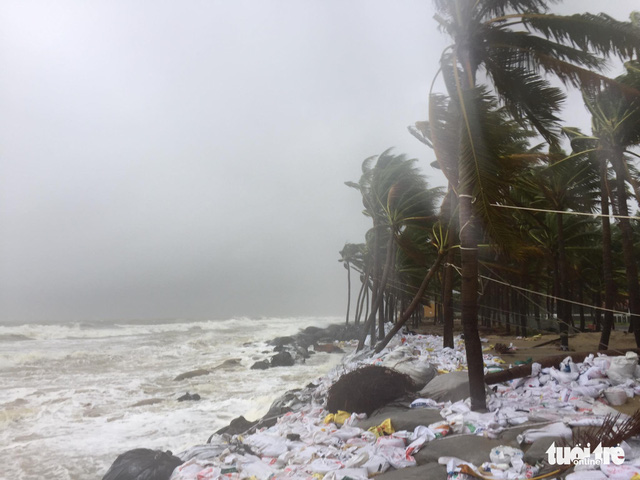 Typhoon Molave reached the maritime area off central Vietnamese provinces on Wednesday morning and has already wreaked havoc in these localities.

Molave was packing wind speed at 115-135km per hour and gusts at up to 185km an hour as of 7:00 am, according to the National Center for Hydro-meteorological Forecasting.

It is expected to make landfall between central Da Nang City and south-central Phu Yen Province in the next 12 hours and weaken into a tropical depression, with winds at 50-60km per hour.

The tropical depression will be further downgraded to a low-pressure zone in the next 12 to 24 hours.

Due to the circulation of the storm, torrential rain will batter the localities between north-central Thua Thien-Hue Province and Phu Yen Province, as well as the Central Highlands from October 27 to 29.

Multiple trees have been uprooted, while many house roofs and signboards blown away, according to the observation of Tuoi Tre (Youth) newspaper reporters.

Many houses, schools, and other public works have also been damaged in these localities.

In Da Nang, a substation exploded at a coastal residential area in Lien Chieu District. Some residents stepped out of their houses but were asked to come back inside by police officers.

Two fishing boats were sunk by strong waves as they were on their way to take shelter off Khanh Hoa Province on Tuesday evening, resulting in the missing of 26 crew members.

Rescuers have been unable to reach the locations due to bad weather.