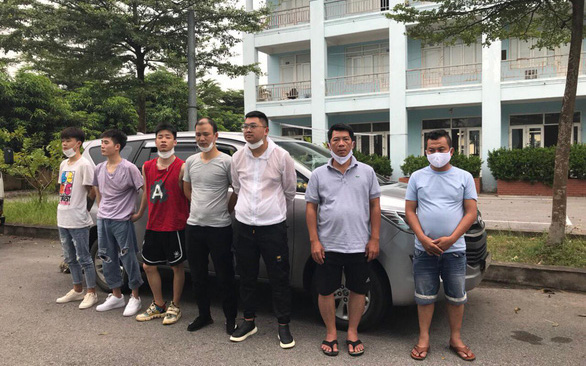 Four residents of south-central Khanh Hoa Province and one Chinese citizen have been caught running an identity forgery ring, which helped two Chinese citizens pose as Vietnamese to reside in the province.

Two out of seven cases of document forgery revealed were committed so Chinese clients could disguise themselves as Vietnamese.

Around May 2019, Khoa was introduced to Ou Yang Chunbo, a Chinese national seeking a Vietnamese passport, to which the former offered the price of VND55 million (US$2,362).

Khoa paid Huy VND50 million ($2,160) to have a fake identity paper created under the name of Tran Duong Huy, a 'resident' of Tra Vinh Province born in 1982.

Hoa was also brought in to forge an ID card as well as the seal and signature of police on a household registration transfer decision.

This identity is then associated with the household registration book of L.V.S., a man living in Khanh Hoa’s Nha Trang City before being assigned to Ou, which helped him complete paperwork and earn his Vietnamese ID on May 30, 2019.

Khoa continued the ploy by escorting Ou to apply for a Vietnamese passport at the Immigration Department under Khanh Hoa Police on June 18, 2019.

When the passport was available, Khoa asked Ngo Ngoc Trinh, a notary at Hoang Long Notary Office, to forge a notary seal on an authorization letter, which gave permission for local woman Nguyen Phuc Hoa to obtain the passport for 'Tran Duong Huy' as Ou was not present at that moment.

The scheme was only busted when Hoa brought the fake authorization paper to the local immigration department.

A police probe on August 4 exposed Song’s forged guise, which he had been using to live and work in Nha Trang City.

According to the charging document, many accomplices involved in the ring have also been revealed, but are not faced with criminal charges.

Several police officers have been reprimanded and penalized for failure in detecting fake documents made by the ring.