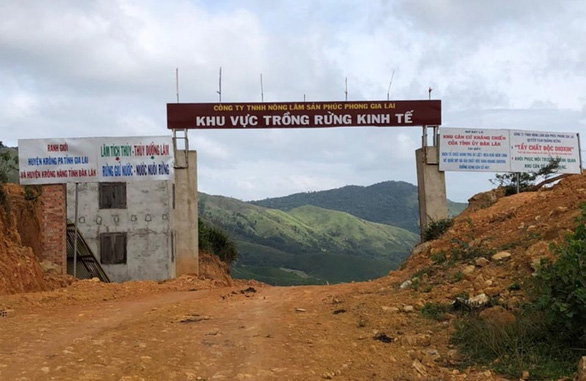 Police in Krong Pa District, Gia Lai Province, located in Vietnam’s Central Highlands, have arrested the chairman of a company contracted to carry out an afforestation project, claiming the executive played a leading role in local deforestation.

Le Hoang Phuc, 67, from My Tho City in the Mekong Delta province of Tien Giang, will likely be held in custody for three months, local police announced on Thursday.

Phuc is the chairman of Phuc Phong Gia Lai Forest Products Co. Ltd, an enterprise which rented 859 hectares of forest land from the Nam Song Ba Protection Forest Management Board for an afforestation project in 2017, according to the People’s Procuracy in Krong Pa District.

The approval allowed Phuc Phong Gia Lai to clear vegetation in the area and plant trees on the land. The firm was not allowed to encroach on forested areas.

However, in November 2018, the forest protection unit of Krong Pa District, in collaboration with Nam Song Ba Protection Forest Management Board, found that three hectares of forest in Chu Drang Commune had been destroyed.

The devastated area included both a productive forest and a natural wood forest.

During the investigation, authorities identified that Le Hoang Phuc was responsible for the deforestation.

Before his arrest, Phuc was unwilling to cooperate with investigators, opening him up to prosecution.

In another development during the investigation, Phuc submitted documents confirming his treatment for mental illness, the local authorities said.