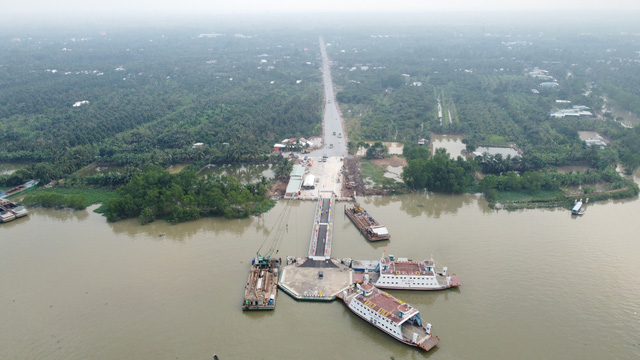 The ferry, located about 10 kilometers from the bridge, links Provincial Highway No. 864 in Tien Giang with National Highway No. 57B in Ben Tre.

According to Tu Anh Nguyen, director of the Ben Tre Department of Transport, the agency has tasked the province’s center for ferry and bus station management to operate the Rach Mieu ferry service.

The ferry route is designed for all vehicles weighing less than 30 metric tons.

Pedestrians and motorcyclists are allowed to use the ferry service at no charge, Nguyen added.

The Directorate for Roads of Vietnam has decided to transfer three ferries from the Tan Phu Ferry route, which connects Chau Thanh with Cho Lach Districts in Ben Tre Province, to Rach Mieu.

The Ben Tre People’s Committee will work with its counterpart in Ho Chi Minh City in the coming time to receive one 200-metric-ton ferry and two 60-metric-ton ferries for the operations at Rach Mieu.

The project is aimed at relieving traffic pressure on Rach Mieu Bridge.

The bridge has been prone to congestion in recent years, especially during long holidays such as the Lunar New Year, as it is located along an essential route between Ho Chi Minh City and the Mekong Delta.

Local authorities have decided to build the new Rach Mieu ferry to mitigate this pressure.