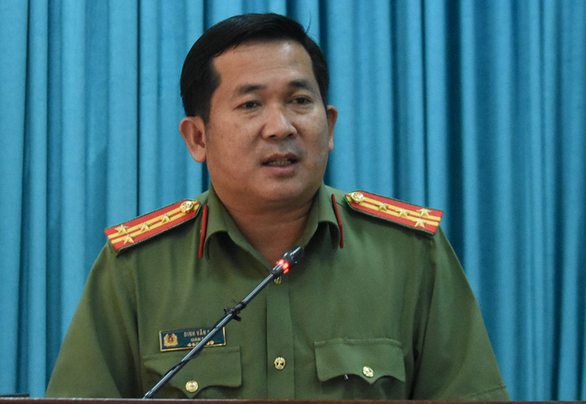 'I was not surprised,' security chief of Vietnamese province responds to ouster attempt

Senior Colonel Dinh Van Noi, director of the Department of Public Security in the Mekong Delta province of An Giang, seemed unperturbed about an attempted ouster against him during an interview with Tuoi Tre (Youth) newspaper this week.

Police in An Giang uncovered a conspiracy initiated by Tran Tri Manh, a local businessman, to remove Noi from his post earlier this month.

Manh is the 42-year-old director of Gia Thinh Production and Trading Co. Ltd. in Chau Phu B Ward in the province’s Chau Doc City.

According to police findings, a group of local businessmen who had been producing and trading counterfeit goods were worried that Noi’s aggressive campaign against social evils, drugs, crime, and other illegal rackets, such as smuggling and counterfeiting, would affect their businesses.

The group suggested Manh bribe Noi’s superiors into transferring him to another locality in order to protect their businesses.

Manh then found four people who claimed to be capable of carrying out the bribery, including Dao Ngoc Canh, 73, a resident in Da Nang, who helped him connect with Ngo Van Trong, 48, also from Da Nang, Vu Van Quy, 30, from Ho Chi Minh City, and Hoang Thi Tam, 54, from Hanoi.

The group of four agreed to oust Noi from his position for VND20 billion (US$872,500). The plan failed and was eventually exposed.

Senior Colonel Dinh Van Noi sat down for an interview with Tuoi Tre on Thursday to discuss the case.

Who did this criminal group intend to bribe with VND20 billion in order to process your transfer to another locality?

I affirm that this group had no connections with any officials. Tran Tri Manh had been trading counterfeit goods for a long time, earned quite a bit of money, and had a large network.

He tried to leverage these resources to send me away once we began beefing up our campaign against him.

Investigators have confirmed that Manh transferred VND10 billion ($436,250) to a bank account belonging to the group of four, VND7.4 billion ($323,000) of which was returned.

They also confirmed that no money was given to any authoritative agencies or organizations.

In truth, all that really happened was that Manh was tricked out of his money.

Though the group of four had no connections with any government officials, why did Manh trust them with VND10 billion?

Manh really wanted to believe the group were capable of doing what they claimed.

The group include people in large cities who claimed to have connections with officials.

In reality, they did not.

We launched a special investigation shortly after uncovering the conspiracy.

Everything the group did was done under our knowledge and was quite predictable.  We’ll continue our fight against large criminal groups of all sorts in the future. We have no plans to back down.

How do you feel about the VN20 billion price tag for your ouster?

This incident neither surprised nor shocked me because I have absolute confidence in the Party, the government, and the public security sector.

On the contrary, it makes me feel that my work is truly making a difference.

If we weren’t doing such a good job at stopping crime, they wouldn’t have felt a need to fight back.