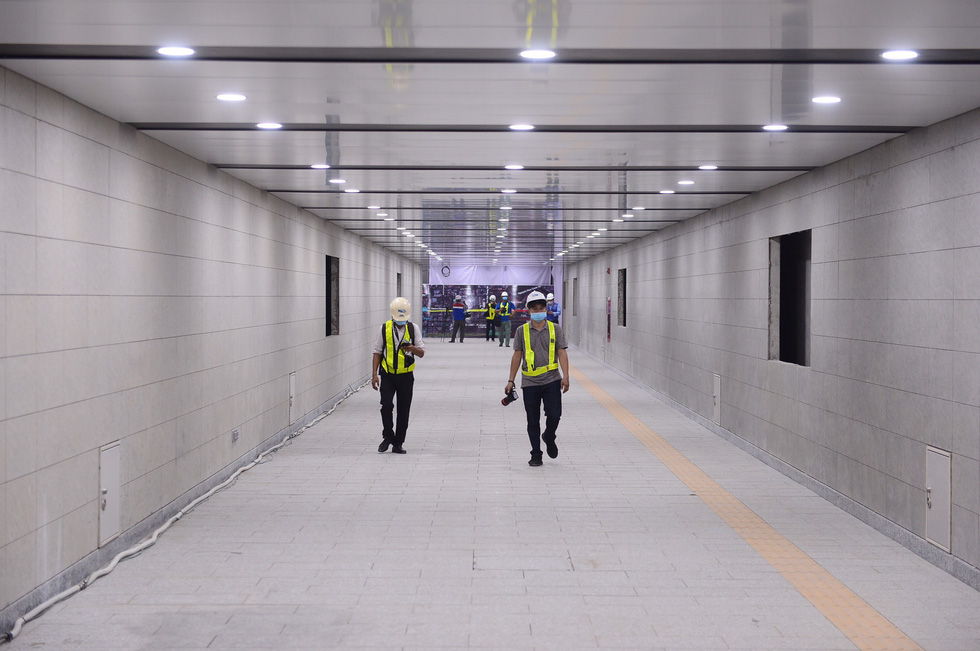 The B1 basement of the Ba Son metro station belonging to the first metro line project, Ben Thanh - Suoi Tien, in Ho Chi Minh City has been completed 31 days ahead of schedule, according to the municipal Management Authority for Urban Railways.

Construction of the basement was initially planned for completion in June this year.

This is one of the two floors of the Ba Son station, which is built underground at a depth of about 20 meters, covering an area of 240 meters long and 34.5 meters wide.

The B1 basement features a wavy design to resemble the waves on the Saigon River and houses the lobby, ticket vending machines, electronic toll gates, and information guide kiosks for passengers.

The B2 basement accommodates the metro platform, where trains stop and park to pick up and drop off passengers.

Previously, the first basement of the Municipal Theater station of metro line No. 1 was also finished earlier than schedule.

The underground section connecting these two stations of the urban railway project has also reached 95 percent completion, according to Sarashina, director of the construction package, despite the COVID-19 challenges.

The Ba Son and Municipal Theater metro stations are among the three subterranean stations of the Ben Thanh - Suoi Tien metro route project, which runs from Ben Thanh Market in District 1 to Suoi Tien Theme Park in Thu Duc City and is 19.7km long, including 2.6km underground railways and 17.1km elevated railways.

The project includes 11 stations above the ground.

Construction started in August 2012, and about 85 percent of the work has been finished.

The Management Authority for Urban Railways said it was working with relevant units to accelerate the construction of other parts of the metro project, including rails, electromechanical systems, signal and information systems, and stations.

Two more trains for the metro route are expected to arrive in Ho Chi Minh City from Japan on May 9, before being transported by road to Long Binh Depot, the metro line’s technical and service station in Thu Duc City, from May 10 to 12.