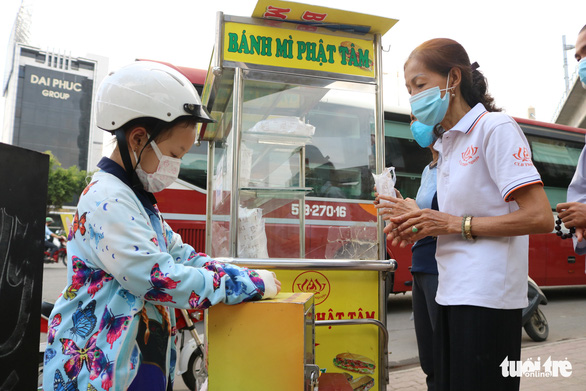 A local charity group that distributes free vegan sandwiches is catching some serious attention for the dance routines they perform on the job.

Every morning, the group meets at 5:00 am to prepare free sandwiches for workers, lottery ticket vendors, and motorbike taxi drivers.

Tran My Linh, a resident of Thu Duc City, was one of the first members of the Phat Tam club when it launched a little over a year ago. The gratitude she receives from those she helps has been the fuel that keeps her delivering free sandwiches each day.

“Every morning I try to finish my chores before meeting up with other members,” said Linh.

“It makes me happy to see people so excited for a free breakfast. I don’t plan to stop anytime soon.”

It takes the group about 30 minutes to distribute all 100 sandwiches. Afterward, they all go their separate ways before meeting again the following morning.

“After helping the group, I return home before heading to work. I used to get pretty tired from waking up so early, but now I’m used to it. To be honest, I find it more uncomfortable to do nothing,” Linh shared.

“At first, we were pretty embarrassed,” Anh recalled, “but we knew if we didn’t do something eye-catching then vehicles would just keep driving right past us. Our dancing helps grab people’s attention and also makes us feel like we’re getting some exercise.”

It costs the group about VND500,000 (US$21.7) to make the sandwiches, funds for which are donated by the members, kind sponsors, and commuters.

Tran Van Thanh, a local driver, often stops when he sees the group and offers a bit of money to aid their cause.

“I don’t have millions of dong, but I can donate thousands of dong every two or three days”, said Thanh.  “I want to support them so they can keep up their work and people in need.”