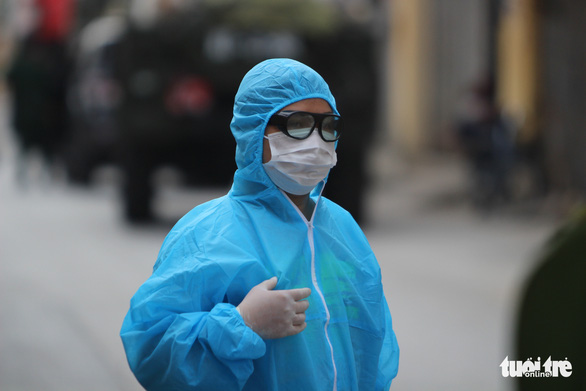 The director of a state-owned enterprise in Hanoi has been removed from his post for violating local regulations on COVID-19 prevention and control.

Nguyen Van Thanh, director of Hanoi Construction Investment Company No. 2 (Hacinco), was dismissed from his position on Saturday for blatantly breaching epidemic prevention rules after he returned to Hanoi on May 2 from a public holiday.

He was simultaneously cashiered as Secretary of the Party Committee of Hacinco.

These disciplinary actions were announced in a resolution issued on Saturday by the board of members of Hanoi Housing Development and Investment Corporation (Handico), the parent company of Hacinco.

The dismissal came only one day after Thanh was suspended as the director and Party chief of Hacinco.

“This is very strict disciplinary action for such an official,” a Handico leader told Tuoi Tre (Youth) reporters.

“We will proceed with the next steps following the dismissal.”

As previously reported, Thanh was found not having made medical declaration, as required by COVID-19 control regulations, when he and his wife returned home from Da Nang, a central city affected by the COVID-19 outbreak, after his holiday.

He then went to numerous places for parties and meetings while local authorities have been discouraging public gatherings.

He even played golf during working hours.

The man acted against Handico’s requirements that all staff members who came back to Hanoi after the holiday from virus-hit areas isolate themselves at home, make health declaration, and work from home for 14 days starting from May 4.

On Wednesday, Thanh and his wife, who reside in an apartment of the Center Point building in Hanoi’s Thanh Xuan District, both tested positive for novel coronavirus at Huu Nghi Hospital in the capital city.

Authorities locked down the building after the couple’s testing results were confirmed.

Preliminary contact tracing results showed that nearly 200 people had come into contact with Thanh before he was found contracting the virus, and many places where he had visited have been barricaded as well.

On Thursday, the Hanoi Center for Disease Control reported that two among the direct contacts of Thanh already tested positive for the coronavirus.

There may be many direct and indirect contacts traced to Thanh as he had traveled to many places before being confirmed as a coronavirus patient, warned Hoang Duc Hanh, deputy of the Hanoi Department of Health.

“This cluster therefore poses a huge risk of spreading the disease to the community, so we must try to trace his contacts as soon as possible,” Hanh said.

“If more positive cases are detected, in addition to administrative measures, I request that police take part in the handling of this case,” Chu Ngoc Anh, chairman of the Hanoi People’s Committee, directed.

On Sunday morning, the Ministry of Health reported 127 local COVID-19 cases, of which 98 were found in northern Bac Giang Province.

The new infections have taken the country’s tally to 4,112 patients since the pandemic broke out early last year.