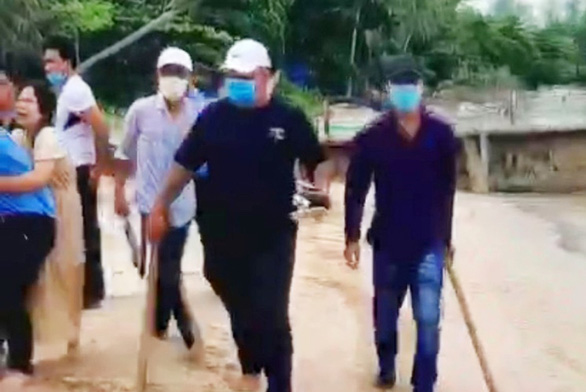 Police in Phu Quoc City off Vietnam’s southern Kien Giang Province said on Monday that they have started legal proceedings against six employees of a local resort for attacking a group of tourists as a way, according to what the resort owner said, to protect fish.

They were hired by Nam Nghi Resort in Cua Can Commune from Kien Long Security Service Co. Ltd. to work as security guards, Ha Van An -- the resort owner -- said on Monday.

At around 3:00 pm on May 18, when a group of tourists, in the company of a number of locals, were approaching the beach along Nam Nghi Resort to cast a fishing net after swimming in the nearby area at Mong Tay Cape, the said security men tried to drive them away.

As the brawl intensified, the security men used baseball bats to attack the tourists at the beach, causing two of them -- Truong Thanh Dien, 48, and Phung Dang Khoa, 43, both living in the same city -- to break their arms.

All of the six security guards were fired by Kien Long Security Service Co. Ltd. and detained by the Phu Quoc City police after the incident.

According to An, the security guards’ behaviors were far beyond the requirements specified in the labor contract signed by both parties.

An said that the six’s motive was merely to protect fish at the beach as local people often throw fishing nets there.

The owner added the resort side will be responsible for taking care of the two victims and paying their treatment fees.

Pham Van Nghiep, deputy chairman of Phu Quoc City, on Monday denied tourism businesses’ right to banish local people and tourists from the beach, clarifying that there is no such thing as leasing sea surface to enterprises.

Local authorities only leased the land along the beach to the resort, Nghieps said.

“Currently, the city’s police are investigating the case and will handle both the security company and the resort owner if they were involved in or directed the staff to attack the tourists."