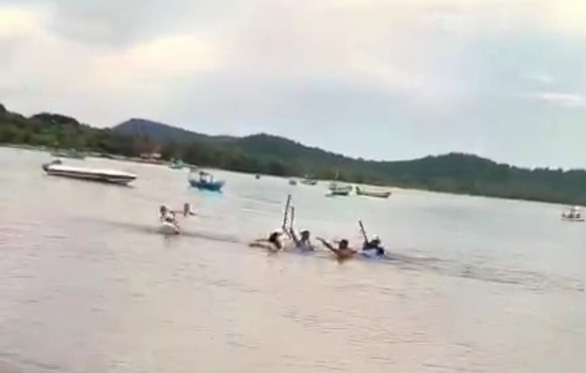 Police in Phu Quoc Island City off Vietnam’s Kien Giang Province said on Sunday that they were temporarily detaining six employees from N.N. Resort for attacking a group of tourists.

The scuffle took place a week earlier when the group of tourists went swimming and fishing at Mong Tay Cape in the company of a number of locals.

Thinking that the group violated the private waters of the resort, a group of N.N. security guards tried to drive them away and then got into an argument with them.

A video recorded by a local involved in the brawl showed several security guards holding sticks and rushing into the sea to chase the tourists ashore.

A video recorded by a local shows a fight between N.N. Resort’s security guards and a group of tourists in Phu Quoc Island City off Kien Giang Province, southern Vietnam, May 18, 2021.

On the beach, despite the intervention of some other tourists, another team of N.N. security guards came and hit the fishing group, causing two of them to break their arms.

The Phu Quoc City police summoned and criminally detained six security guards of N.N. Resort to investigate their act of intentionally causing injury to the victims.

It is known that the area of Mong Tay Cape was formerly under the control of a local border guard station.

After being handed over to a tourism business, the area is often under border dispute, prompting the owners of some resorts there to hire young men to guard it.

Currently, the case is being further clarified by Phu Quoc authorities.