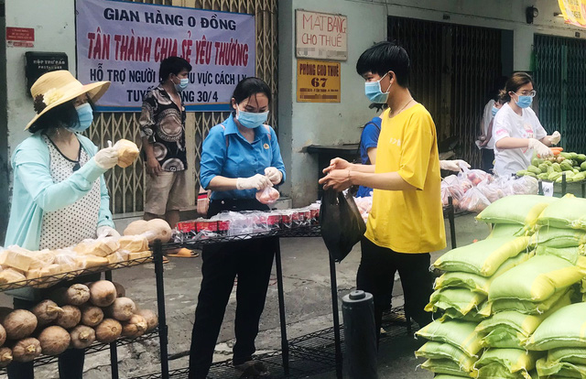 In Tan Phu District, one of the gravest outbreak sites of COVID-19 in Ho Chi Minh City, 18 pop-up markets were erected to distribute complimentary groceries to struggling people during the ongoing social distancing period.

These markets are located in six wards of the district, confirmed by Dang Thi Hong Van, president of Tan Phu District’s Fatherland Front, on Tuesday.

The agency, in cooperation with socio-political bodies and benefactors, launched these marketplaces to support residents in tough times of the pandemic.

The markets, set up in public spaces, are run by volunteers and leaders of residential areas, who restock groceries and other necessities on the shelves every morning.

According to Dang Thi Hong Van, the first zero-cost market was erected in a cordoned-off area in Tan Quy Ward and was later replicated in other locales of Tan Phu District.

Receiving support and donations from many benefactors, the market is continuing to relieve the burden for local areas that are struggling financially during the social distancing mandate.

A free grocery stall has also been erected in Tan Hung Thuan Ward in District 12, said leaders of the ward on Tuesday.

Organized in front of the Tan Hung Thuan Ward People’s Committee building from June 8 to June 13, these stalls provide food and necessities for free to local residents.

It is run by the Tan Hung Thuan Ward People’s Committee, volunteers from the local Women’s Union, the Youth Union, the Trade Union, and the Red Cross Association, as well as benefactors.

Authorities in Tan Hung Thuan Ward have also held a special tree care contest among twelve households in the area with the aim of decreasing people’s psychological distress during a social distancing period.

Each household has 20 days to grow and care for an apple tree, which was assigned to them by the authorities.

There will be one first prize of VND2 million (US$87) and three consolation prizes worth VND500,000 ($22) awarded at the end of the competition.

Starting May 31, Ho Chi Minh City entered social distancing for at least two weeks to curb the spread of the fourth coronavirus wave, which has raged in Vietnam since April 27.

The city imposed the government's Directive 16 in Go Vap and Thanh Loc Ward in District 12, while the rest of the city had to comply with the slightly less stringent Directive 15, which suspends social events, bans gatherings of 20 people or more anywhere and 10 or more outside of workplaces, schools, and hospitals.

Directive 16 prohibits gatherings of more than two people in public and people can only leave home for emergencies, buying food and medicines or working in facilities and businesses that produce or sell essential goods.

Vietnam has documented a total of 9,222 COVID-19 patients, including 3,549 recoveries and 55 deaths, since early 2020, when it confirmed the first coronavirus-positive patient.

During the fourth wave of coronavirus, the Southeast Asian country has recorded 6,045 infections in 39 out of 63 cities and provinces.