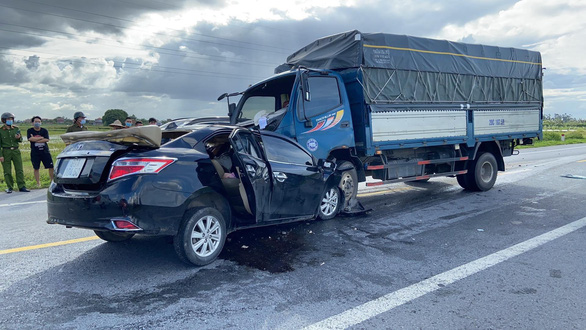 Traffic police in Vietnam are investigating a head-on collision involving a truck and a sedan in the northern province of Hung Yen, where three victims were found dead on the spot on the weekend.

The accident transpired around 3:00 pm on Sunday in Dang Le Commune of Hung Yen’s An Thi District on a road connecting Expressway 5B and Phap Van - Cau Gie Expressway.

The truck was steered by Nguyen Dinh Q., 36, who hailed from Thai Binh Province, while the car was driven by Tran Van D., 31, from Hung Yen.

As seen from the scene, the two automobiles were severely wrecked from the crash.

Vietnam reported a total of 14,510 traffic accidents in 2020, which caused 6,700 deaths and 10,804 injuries, according to the National Traffic Safety Committee.