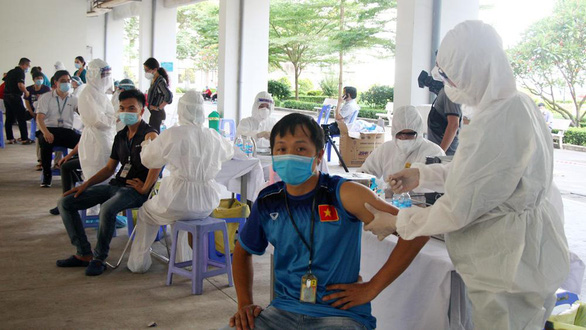 The Ministry of Health confirmed on Tuesday nearly 400 domestic coronavirus infections in Vietnam, the majority in a hotbed in the northern region and 90 in Ho Chi Minh City.

A total of 398 local cases were reported across the country, including 204 in isolated areas, the health ministry said in a report the same day.

Northern Bac Giang Province, which is the nation’s largest cluster, recorded 235 of the infections, while its neighbor Bac Ninh Province detected 55 patients.

Vietnam has detected 7,997 community cases in 40 out of its 63 provinces and cities since the ongoing fourth virus wave broke out on April 27.

Authorities in Ho Chi Minh City on Monday decided to extend the enhanced social distancing measures having put in place since May 31 by two weeks to stall escalating community spread, as over 80 patients have been confirmed on a daily basis since the weekend.

The Southeast Asian nation has reported 11,212 cumulative infections as of Tuesday evening, including 9,566 domestic and 1,646 imported cases, according to the health ministry’s data.

The number of recovered patients has reached 4,543, including 303 announced on Tuesday, while 61 have died, most with severe pre-existing conditions.

More than 4.8 million people have been tested in this fourth wave, the worst so far.

The country administered 54,328 AstraZeneca vaccine shots to medical staff and other frontline workers on Monday, taking the total to 1,552,651 doses since inoculation was rolled out on March 8.

The government has set a target of securing 150 jabs, as it expects to immunize at least two-thirds of a population of almost 98 million people this year.

It has received about 2.9 million AstraZeneca shots so far.