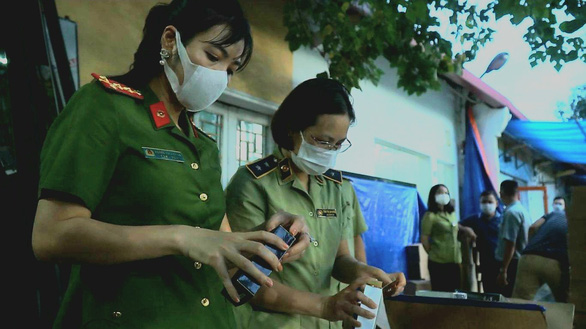 Hanoi police have seized a sizable batch of perfume and beauty products imitating famous designer brand names such as Dior, Chanel and Gucci.

The commodities were found in a warehouse of Hancorp, a state-owned construction company in Yen Phu Ward of Tay Ho District, during a raid on Wednesday, local authorities said.

They included some 12,000 boxes of perfume, moisturizer, facial mask, deodorant, and make-up remover.

As per local officers, this is one of the biggest seizures of fake designer perfume that Hanoi has seen in the past few years.

The owner of the cargo was identified to be Hoang Quoc Phuong, 32, from Yen Phu Ward.

According to preliminary inspection, Phuong sourced the counterfeit perfume on social media at the price of VND40,000-120,000 (US$1.7-5.2) per bottle and distributed them exclusively to online sellers in surrounding provinces.

His contraband was temporarily stored at the Hancorp warehouse before being distributed to sellers in less than a day.

It is suspected that Phuong has connections with certain personnel of the state firm, as he was able to pass the security check and use a warehouse inside to store his products.

He was not able to present any certificate of origin to the police at the time of the bust.

His items were also confirmed to be fakes by representatives of the high-end brands in Vietnam.