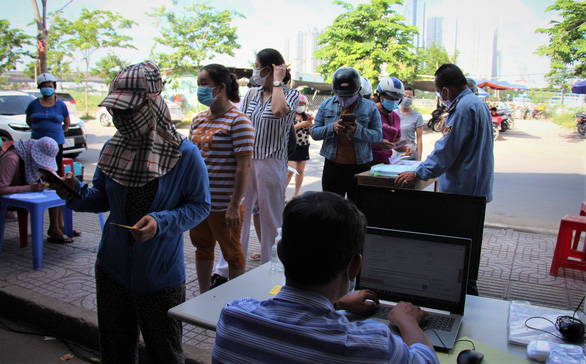 In a bid to combat the fourth coronavirus wave, authorities in Thu Duc City, a locality administrated by Ho Chi Minh City, on Wednesday rolled out a personal QR code system that keeps track of market-goers’ medical declarations and helps to control footfall inside stores.

Specifically, each resident in Thu Duc City has been provided with a QR code detailing their personal information.

Officers at marketplace checkpoints will be able to scan these QR codes and promptly document the information of market-goers for future contact tracing efforts.

They also issued a fixed number of entrances per store to ensure that the footfall does not exceed the given quota at all times.

Once a store reaches its capacity, market-goers will have to wait outside until shoppers leave and return their passes on the way out.

The introduction of QR codes and entrance passes is expected to ensure social distancing in crowded spaces.

In light of COVID-19 transmission detections that shut down 18 out of 34 traditional markets in Thu Duc, the measures will also help sustain the safe operation of the remaining markets, as they are essential venues for groceries that the majority of local residents depend on.

It is revealed that Thao Dien, Binh Khanh, An Khanh, and Thanh My Loi Markets have each issued 5,500 market passes to their residents, while other local markets will soon follow suit.

The measures came in response to the alarming escalation of the epidemic in Ho Chi Minh City, which is currently marked as the gravest outbreak site with 8,385 patients recorded since the fourth wave broke out in late April.

City officials have already closed down many major wet markets where coronavirus infections had been found.

On Wednesday, Ho Chi Minh City authorities decided to up the ante in social distancing measures to struggle with the escalation of COVID-19 transmissions in Vietnam’s fourth and worst-ever coronavirus wave.

The whole city will go into 15 days of extensive restrictions, which ban public gatherings of more than two people, non-essential businesses and travels, as well as public transport, on Friday.

The Ministry of Health has recorded 19,924 local infections, including 314 announced on Thursday morning, since the fourth virus emergence started on April 27.