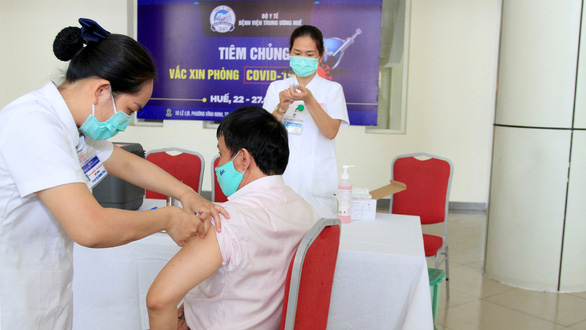 Vietnam’s Ministry of Health on Wednesday announced that it has so far distributed a total of 8,166,800 million doses of various COVID-19 vaccines to authorities and agencies throughout the country.

According to the Ministry of Health, Vietnam received just 3.9 million jabs in the first half of 2021, far fewer than domestic demand, due to a global shortage of vaccine supply.

As more shipments of vaccine are expected to land in Vietnam in July, the Southeast Asian country is anticipating to have received a total of 8.8 million doses by the end of the month.

“The jabs will be administered on the principle of parity and transparency,” the ministry stated.

Vaccine distribution will be carried out under the prime minister’s direction and will prioritize outbreak sites, as well as provinces and cities in key economic regions, areas undertaking government-level economic development plans, locales with many industrial zones, industrial clusters with a large number of workers and dwellers, and places along international border gates.

Based on these criteria, Ho Chi Minh City, Bac Giang Province, and Bac Ninh Province were given vaccine priority due to the grave developments of COVID-19 infections in these areas.

“The Ministry of Health will stick to these criteria in the near future,” the ministry affirmed.

Provinces and cities that have received the jabs are required to push forward with their vaccination plan for prioritized demographics, as stated in the Prime Minister’s Resolution, or add more priority groups if the situation calls for it.

On top of that, frontline workers, residents in tourism hotspots, freelance workers, Vietnamese citizens preparing for work, study or residence in foreign countries, foreign experts, and diplomats in Vietnam will also be prioritiszed.

The Ministry of Health expects to receive 124 million doses of COVID-19 vaccine by the end of the year.

The ministry said on Wednesday that U.S. vaccine maker Pfizer would provide an additional 20 million doses, co-developed with BioNTech, to administer to 12-18-year-olds.

After successfully containing the disease for much of the pandemic, Vietnam has faced a more stubborn outbreak since late April, with a surge in daily infections reaching record levels, adding to pressure on the government to accelerate inoculations.

However, the vaccination campaign is still in its early stages, with fewer than 300,000 people fully vaccinated thus far.

It has so far used AstraZeneca's viral vector vaccine and last week took delivery of 97,000 doses of the Pfizer-BioNTech mRNA shot.

The country said it would offer Pfizer-BioNTech coronavirus vaccine as a second dose option for people inoculated 8-12 weeks prior with a first dose of the AstraZeneca vaccine.