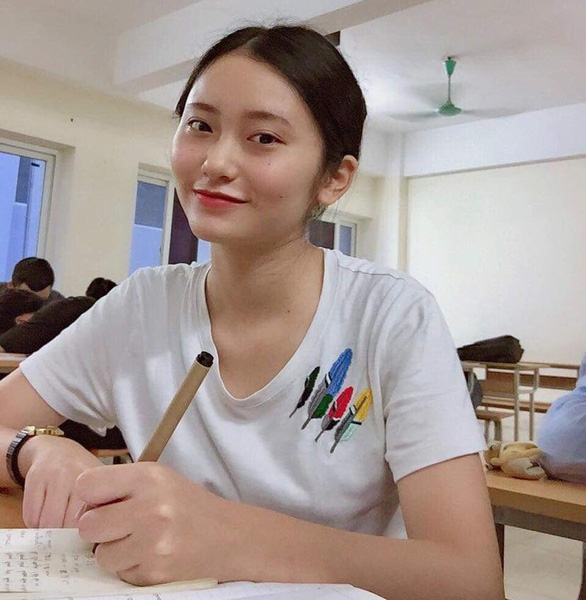 With the conscious aim of reducing used oil waste in the environment, Nguyen Ngoc Linh, 21, a student at the University of Economics - Technology for Industries (UNETI) in Hanoi, found a way to convert it into soap.

“The used cooking oil can undoubtedly have harmful effects on the sewage system and the local environment if it is discharged directly,” said Linh.

She gets to know the way to properly recycle it into usable soaps after brainstorming various ways of addressing the problem.

As an active member of a forum that shares ideas of recycling and reusing, Linh invited others to give her used cooking oil and receive a 40-gram soap for one liter of such cooking oil as a reward.

The student has been keenly interested in leading a sustainable life for a long time.

At first, she chose some natural materials like soapberry enzyme. But she found out it would be extremely difficult for soapberry to wash grease bowls and dishes.

On top of that, finding that some members of her family did not like soapberry’s sour smell, Linh mulled over other options of materials and then decided to choose used cooking oil.

The process of turning the cooking oil into soaps includes several stages. The first one is to remove impurities from the used cooking oil like sludge and water.

Subsequently, Linh soaks the fluid with herbals like a dried daisy or dried green tea leaves to deodorize it before filtering once more.

In the finishing stage, Linh mixes the purified oil with other materials like coconut oil, coffee powder, turmeric powder or preferred essential oil, and caustic soda.

She then pours the mixture into the molds to make soap bars.

Linh will unload the molds one week later, cut them into bars, and leave them dry in a well-ventilated place for about three to four weeks.

“The oil is easily spoiled after being left for a long time without doing anything.

"The deodorizing process is demanding too if the oil has too much sludge or a foul smell."

Linh has gained much experience in producing soap from used cooking oil by taking part in the creative Skillful Hands community, which is an online class offering many videos instructing members to make handmade soaps and lipsticks.

Apart from that, the 21-year-old girl has gained support from a community of youths who share a love for nature and the environment.

“I have received many messages asking to give me waste oil for nothing,” said Linh.

“Some asked me how to produce soaps by themselves at home."

Linh can make around 12 or 13 soap bars weighing 40 grams each from one liter of used cooking oil. It takes her over two months to make a batch of six to 12 soap bars.

Thanks to her careful and thorough process of filtering and deodorizing, the accomplished soap bars have a slight smell of herbal or essential oil that had been mixed during the recycling.

She has made 20 batches of soaps to date with three main fragrances -- lavender, mint, and coffee.

“My first batch failed due to my impatience,” the student said.

“I made many mistakes, in fact, for instance, I did not check the hot temperature of soda, which led to the final products’ imperfections.

"I also cut the soap into bars too soon, which made it more difficult to shape and not good-looking as well."

Despite the failures, she kept going until she produced a desirable product.

Making recycled soap by herself as a student, Linh’s number of products is limited, however.

Most of her soaps are currently consumed by her family, gifted to relatives, exchanged for used cooking oil in the hope of decreasing the amount of oil to be discharged into the environment.

Linh hopes to be able to sell soaps made from used cooking oil and some other environment-friendly products in the future.

In this way, she can contribute to raising awareness of a green life and making the environment cleaner and more beautiful.

“I know many friends can’t take part in the recycled soap project as they live too far away,” she said.

“I know there is a burning desire to live green in the community.

"So, I hope what I do can inspire many others to follow suit in the future."

Linh has only just completed the research on making liquid soap from used cooking oil.

As far as she knows, the recycled soaps should just be for dishwashing and laundering, not for bathing.

“I tried making liquid soap with the hope that it will be more convenient to use,” explained Linh.

“In the form of liquid, the soap would be for washing dishes, cleaning the floor, and even washing clothes."