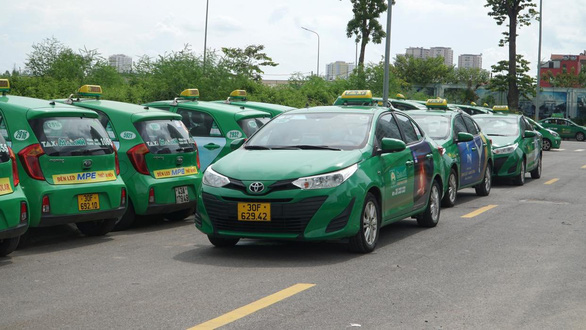 A fleet of 200 taxicabs owned by operator Mai Linh was put back into operation on Wednesday to give emergency rides to residents in Hanoi after the Vietnamese capital city shut down all public transport, ride-hailing, and taxi services as part of an elevated COVID-19 social distancing measure introduced last week.

The fleet is distributed throughout all districts and at major hospitals.

All 200 vehicles have been registered and approved for emergency use by the Department of Transport, according to Nguyen Cong Hung, director of Mai Linh Group’s Hanoi office.

To ensure epidemiological safety, the cars have been equipped with transparent partitions to separate passengers’ with drivers' booths.

Customers and drivers are required to wear face masks, while the latter must utilize no more than 50 percent of their cars’ capacity, keep the car windows down at all times, prepare hand sanitizer, and fumigate the vehicles after each ride.

On Saturday last week, Hanoi authorities began the implementation of the prime minister’s Directive No. 16, which maintains that all road and waterway passenger transport, including urban buses, taxis, charter coaches, inter-provincial buses, ferries, as well as motorbike-based transport services be ceased.

All tech-based passenger and package delivery services have also been shuttered, save for those that serve the city’s epidemic prevention effort, public missions, diplomatic purposes, or the conveyance of workers and experts.

This is the second time that Hanoi has resorted to the stringent Directive No. 16, the first being in April 2020, which lasted for nearly a month.

The capital city has reported 1,082 COVID-19 infections since April 27, when the fourth wave started wreaking havoc in Vietnam, according to statistics.