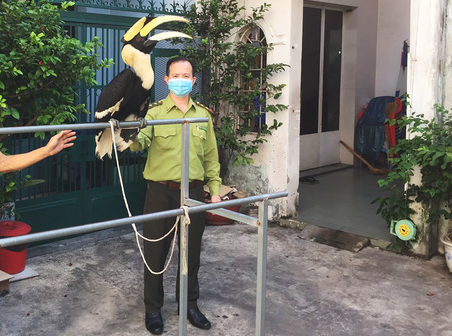 A resident of District 8, Ho Chi Minh City on Wednesday handed over a 2.1-kilogram great hornbill he had previously caught to the local forest protection department after learning that the bird is listed as rare and endangered.

The great hornbill, whose scientific name is Buceros bicornis, is classified as an endangered, precious, and rare forest animal in Vietnam.

At the time of reception by Ho Chi Minh City forest rangers, the great hornbill was in a weakened state, with many of its tail feathers having fallen off.

The bird was then brought to the Cu Chi Wildlife Rescue Station in the namesake district for treatment and further care.

The stump-tailed macaque, weighing about nine kilograms, was handed over by M.A.T., hailing from Nha Be District.

T. said he used a trap to catch the monkey, which often broke into his house and messed around with his furniture.

The giant Asian pond turtle, weighing 4.5 kilograms, was discovered by N.T.V. in Thu Duc City during a fishing trip.

The Asian small-clawed otter was transferred by another resident of Thu Duc City, who said he had purchased the 2.5-kilogram animal online.

All three of these rescued animals, which are also categorized as precious and rare species, are currently in the care of the Cu Chi Wildlife Rescue Station.

The wild animals are expected to be released into nature upon their recovery.