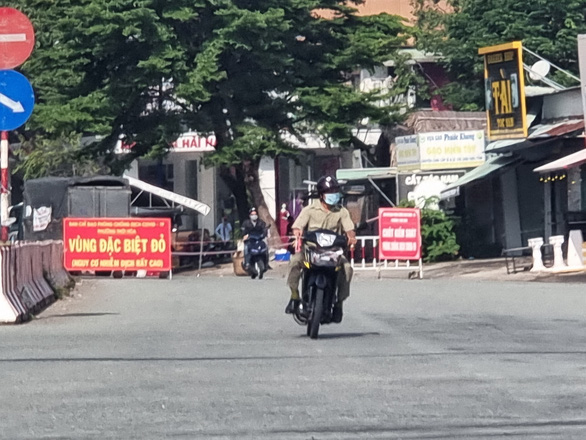 Dwellers who have been fully vaccinated against COVID-19 and live in relatively safe areas of Binh Duong Province, currently a coronavirus epicenter of Vietnam, will be given passes that allow them to go outdoors during the ongoing social distancing order.

It is part of the provincial authority’s decision to ease travel restrictions announced at a meeting on Sunday and set to commence one day later.

The relaxing of the movement curbs, which have been in place in Binh Duong since late June, is effective in four ‘green zones,' namely Dau Tieng, Bau Bang, Phu Giao, and Bac Tan Uyen Districts.

As per Binh Duong’s classification, areas are divided into four categories of green, yellow, orange, and red zones, with the warmer colors indicating the higher risks of COVID-19 spread.

With the new regulations in place, residents in ‘green zones’ who have got fully vaccinated against COVID-19 would be granted a ‘green card’ that allows them to travel outside, while those who have received only one jab will be given a ‘yellow card,’ which means they would still have to obtain a valid coronavirus-negative test result in order to go out, according to Nguyen Van Loi, secretary of the Binh Duong Party Committee and head of the local Steering Committee for COVID-19 Prevention and Control.

People who have yet to get immunized would not be permitted to go outside, the official added.

The rollout of the relaxed measures would be divided into two phases.

While the first phase, lasting from September 6 to 9, restricts civilians’ movement within their respective districts, the second from September 10 to 15 will permit cross-district travels, with traffic distributed to multiple routes.

The measures would also reduce the number of COVID-19 checkpoints in 'green zones,' officials stated.

In the meantime, areas declared 'red zones' in Binh Duong, namely Thu Dau Mot City, Di An City, Thuan An City, Tan Uyen Town, and Ben Cat Town, will keep up with their elevated social distancing fiat, which requires all residents to stay home unless for essential duties.

The province is pushing forward with its vaccination drive, currently administering one million doses of Sinopharm COVID-19 vaccine it received from Ho Chi Minh City in early September.

Local authorities are striving to contain the virus by September 15 in order to bring the province to a ‘new normal’ state, and are urging residents to take at least one COVID-19 jab, emphasizing that the best vaccine is the first one to arrive.

With an adult population of 1.5 million people, Binh Duong would require a total of 3.2 million COVID-19 jabs to provide every one of them with at least two doses, local officials estimated.

As of 4:00 pm on Sunday, the province had administered nearly 200,000 Sinopharm doses, bringing the total number of distributed shots to 1.3 million and vaccine coverage to nearly 50 percent.

About 46,000 people have been fully vaccinated with two doses in the province.

With 3,540 new COVID-19 cases recorded on Sunday, Binh Duong has logged 132,433 infections since the fourth wave emerged in Vietnam on April 27, out of which 79,000 have recovered, while 1,097 have been confirmed dead, according to the Ministry of Health's data.