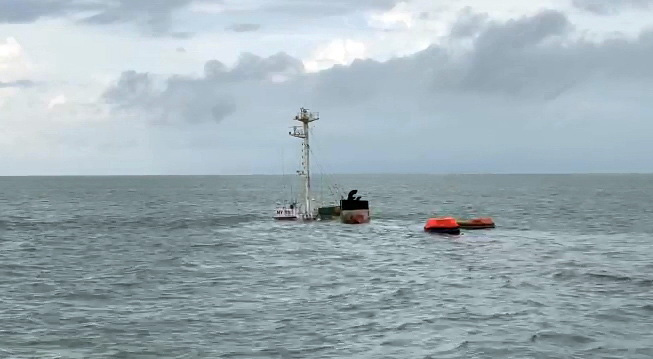 The port authority in southern Ba Ria - Vung Tau Province has discussed plans to salvage a Vietnamese ship carrying 10,000 metric tons of clinker that was rammed and sunk by a Liberian cargo vessel on Tuesday.

Liberia’s Lisa Auerbach vessel with a tonnage of more than 12,500 metric tons collided with Vietnam’s My An 1 ship during its voyage from Vung Tau, the capital city of the southern coastal province, to Ho Chi Minh City on Tuesday morning.

The My An 1 ship was anchored about 7.2 nautical miles south-southwest of Vung Tau Cape, carrying nearly 10,000 metric tons of clinker, at the time of the collision.

As the Vietnamese ship sank, the Lisa Auerbach managed to rescue all of 17 crew members of the vessel.

Authorities have prepared to deal with an oil spill from the My An 1 ship, which was laden with about 40 metric tons of fuel oil before the collision.

Functional forces discussed solutions to remove the oil from the wreck, tow it ashore, and set up warning buoys around its last location.

The accident did not affect ship safety and traffic off Vung Tau’s port, according to an official from the Vung Tau Maritime Port Authority.

No signs of oil spills had been detected at the scene of the accident as of Tuesday afternoon.