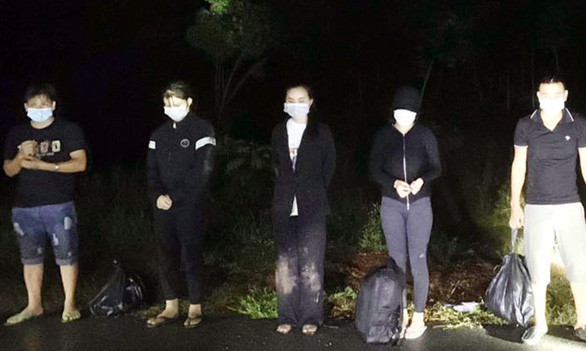 Border guards in Vietnam on Monday nabbed eight locals who attempted to sneak into Cambodia for work opportunities.

Soldiers at Hoa Lu International Border Gate in Binh Phuoc Province caught the suspects while they were trying to enter Cambodia through Thanh Bien Village, located in Loc Ninh District.

The suspects, the oldest being 32, hail from Hanoi, Ho Chi Minh City, Dak Lak Province, and many other localities of Vietnam.

According to their testimonies, the group was involved in a trafficking ploy after searching for jobs on social media.

They were told to assemble in Binh Phuoc to get transported to Cambodia for work, but the plan was foiled before they could reach the destination.

Hoa Lu border guards are working to clear the case.

Also on Monday, Binh Phuoc police and other monitoring forces prevented a truck from smuggling seven individuals through a COVID-19 checkpoint in Thuan Thanh 2 Village of Dong Phu District.

The truck passed through the checkpoint with a ‘green lane' QR code on it, which prompted the police to pull it over for inspection.

A ’green lane' QR code enables a vehicle to pass through COVID-19 checkpoints as they carry essential commodities, transport workers, or those performing other allowed duties.

After police found seven smuggled people on the truck, the driver Tran Van Bac, 36, admitted that he and the co-driver were transporting them from Binh Phuoc’s Dong Xoai City to Bu Gia Map District for work, which violated the current COVID-19 movement restriction.

All the drivers and passengers on the truck tested negative for the virus later.

Functional forces are working to further investigate the case.

Binh Phuoc Province has recorded 1,121 COVID-19 infections and six deaths since the epidemic erupted in Vietnam in early 2020.